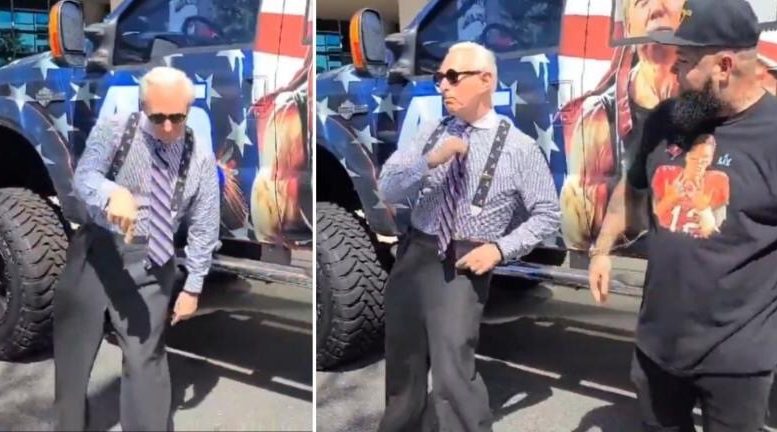 Daily Caller field reporter Jorge Ventura posted a video on Twitter Saturday, writing , “Walking into #CPAC and I see this”.

Ventura’s video featured former Trump advisor Roger Stone, who was caught on camera grooving to the beat outside of the Conservative Political Action Conference (CPAC) in Orlando, Florida, next to a lifted truck, which was wrapped with a Rambo Trump-theme.

Walking into #CPAC and I see this pic.twitter.com/3NljOwNFJZ

Here is another angle of Roger Stone:

Political operative Roger Stone told Fox News on Saturday that he would support former President Donald Trump if he decided to run for the White House in 2024 — but warned that anti-Trump forces would seek to “bury” his accomplishments.

“If he ran again I would certainly support him, but four years is a very long time. What will happen now based on history is the Democrats and academia and the media will seek to bury his great accomplishments,” he said.

Stone spoke to Fox as he was walking through the Hyatt Regency hotel, where the Conservative Political Action Committee (CPAC) was being held.

Stone told Fox that it was necessary for conservatives to remind the American people of Trump’s accomplishments in office, and suggested a legacy project to do exactly that.

“The American people need to be reminded that we had the greatest jobs boom in American history, for example, under President Trump, that we rebuilt our military strength, that we negotiated much, much better trade deals — so I favor some kind of Trump Legacy Project to remind the people of how much this man accomplished with the opposition of elite leadership of both parties,” he said.

“I think that’s very important if the president has a comeback in mind which he may decide to do,” he said.

Stone had a stark message for the GOP, warning that they will never be competitive again if they don’t fight back against censorship of conservative views.

“The conservative movement needs to focus on breaking the blockade of truth and the censorship of all mass communications in the United States, whether it is network television, cable television, print media or journalism,” he said.

“The current state of censorship is not only unconstitutional, it is illegal under anti-trust and if it is not fixed the Republican Party will never be competitive again despite the fact that a majority of Americans support the America First agenda,” he said.