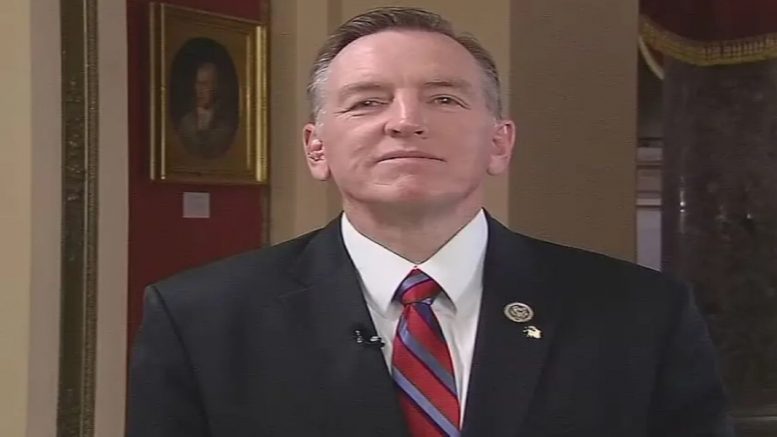 Rep. Paul Gosar (R-AZ) offered an amendment to strike several sections of the American Rescue Plan Act–which in turn, would increase recovery rebates to individuals up to $10,000 for Americans unemployed due to COVID-19 and also for lower income Americans continuing to work through the pandemic. His amendment though, was shot down by Democrats.

The Democrat-led House of Representatives, however, passed the bloated $1.9 trillion stimulus bill. The bill passed 219-212 late Friday night and will now head to the Senate for a vote.

Rep. Gosar informed Americans Saturday on Twitter of the amendment that he had offered, “Only 9% of Pelosi’s $1.9 trillion ‘plan’ is related to COVID-19.”

“Government ordered the shutdown and broke the back of the economy. Break it, buy it,” the Arizona congressman said.

“Americans need help with car payments, mortgage, rent, and everyday necessities. The people, not government, corporations, or billionaires, need this help. Consider $10,000 a down payment,” he added. Continued Below

Governement ordered the shutdown and broke the back of the economy. Break it, buy it.

Americans need help with car payments, mortgage, rent, and everyday necessities. The people, not government, corporations, or billionaires, need this help. Consider $10,000 a down payment.

Republicans have complained that the act was packed with pork unrelated to the pandemic, adding to the national debt and potentially spurring inflation.

But House Speaker Nancy Pelosi (D-Calif.) had proclaimed at an evening press conference that “this is a spectacular piece of legislation.”

Republicans unsuccessfully proposed removing $140 million for an underground rail line connecting the San Francisco area, which Pelosi represents, to Silicon Valley. A motion failed to reallocate those funds to mental health grants for children that suffered from the pandemic.

Other provisions include $350 billion for state and local governments. New York City is expected to receive about $5.6 billion if the bill passes. The state government would get about $12.7 billion, according to estimates released by Rep. Carolyn Maloney (D-NY).

But House Minority Leader Kevin McCarthy (R-Calif.) said that the bill was largely unnecessary, pointing to an estimated $40 billion flowing to California’s government, despite the state recently reporting a $10 billion budget surplus.

“95 percent of the funding in this bill isn’t even scheduled to be spent for another year, creating more uncertainty for families,” McCarthy said on Friday. “And in fact, less than 9 percent of the bill will be used to fund public health.”