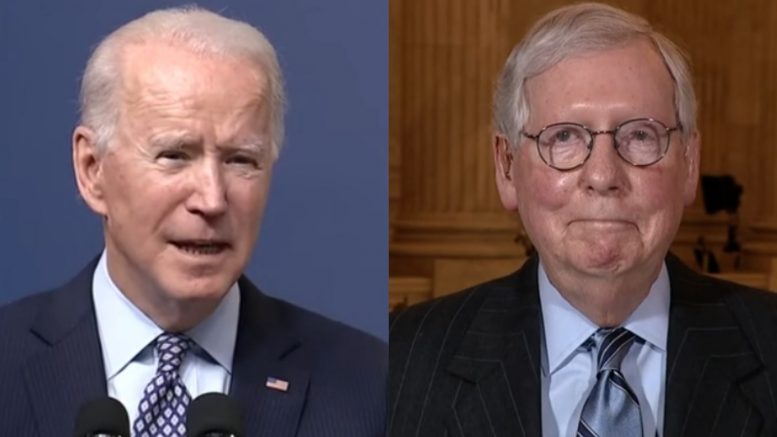 Senate Republican Leader Mitch McConnell appears to be interested in putting the past behind him and uniting the Republican Party despite his differences with former President Donald Trump.

Both McConnell and Trump made headlines over the past couple weeks after the Senate minority leader scolded the 45th President over the January 6th riot at the Capitol Building.

Although McConnell voted to acquit the former president on one article of impeachment, the Senate minority leader claimed that Trump’s actions after the presidential election were “unconscionable” and foreshadowed that Trump still could face accountability for his actions in criminal courts. The 45th President fired back by naming Senator McConnell as a “dour, sullen, and unsmiling political hack,” adding that the GOP would “never again be respected or strong” with McConnell steering the wheel.

Pressed on his brief feud with the former President, Sen. McConnell told Fox News host Bret Baier: “What happened in the past is not something relevant now. We’re moving forward. We have a new administration, it’s a very left-wing administration.”

McConnell suggested that the “extremely progressive approach” taken by the Biden Administration is making is “easier” for Republican lawmakers to unite despite their differences.

“We need to make sure the American people understand that this is not what Republicans stand for,” McConnell said. “Having chosen the progressive root [President Biden] has certainly made it a lot easier for me to unify my members in opposition.”

Asked if the Republican Party is in a civil war, Sen McConnell replied, “No, I think if you’re looking for a real civil war, look ay the Democrats in the House making it extremely difficult to operate given the narrow margin she has overall in the House.”

Pressed on whether he would support former President Trump is he won the Republican nomination for president in 2024, McConnell said, “Absolutely.” Video Below

Reporter to Biden: If the Voting Bill Isn’t Passed, Do You Believe the Midterms Will Be ‘Fairly Conducted’ & ‘Results Will Be Legitimate?’