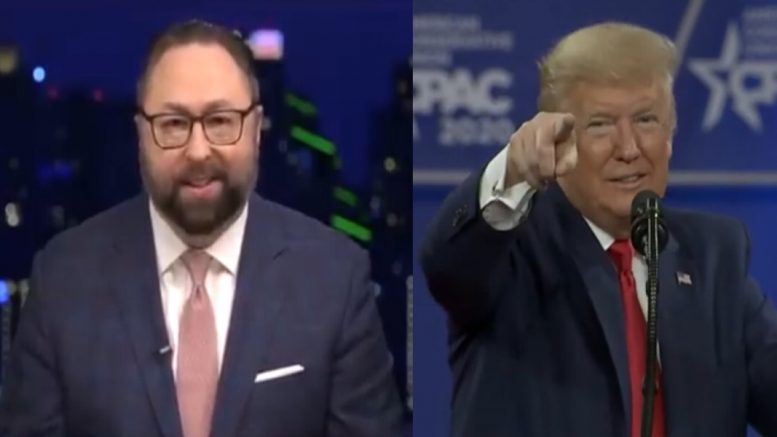 Trump advisor Jason Miller spoke with host Maria Bartiromo on Friday during Fox Business’ “Mornings with Maria”, highlighting topics the 45th President will discuss during his CPAC speech on Sunday.

Asked if he thinks former President Trump will be the nominee for the Republican Party in 2024, Jason Miller told Bartiromo, “I certainly hope so. There hasn’t been any decision made yet, but my bias is pretty clear here.”

“I gotta tell you, Maria, buckle up for Sunday. President Trump is back and better than ever if you believe in the ‘America First’ movement and what he’s been trying to do over the last 4 years. I think you’re gonna like it. But if you’re part of the swamp or the big tech or big media or Joe Biden’s radical leftwing mob, you’re being put on notice,” Jason Miller warned.

When asked what Trump will discuss in his speech at CPAC, Miller told Bartiromo, “On Tuesday of this week, the president sat down with his speech writing team and dictated out to them where he wanted to go, and it’s really about the future.”

“It’s about how we grow the Republican Party, how we take these successes, how we win back the House and the Senate in 2022, but there’s also some very strong policy critiques of Joe Biden in this disastrous first month– everything from school re-openings …. immigration policies, amnesty, stopping wall construction, … capitulating to China, and how Joe Biden is putting reverse on a lot of these policies President Trump started over these past 4 years,” he explained.

Miller also noted social media censorship on “free speech”, seemingly with at conservatives “or anyone who doesn’t conform with this woke mob mentality that’s out there”, adding, “The way that Joe Biden has come [in] his first month, and they’re putting identity politics ahead of American identity …  the fact that they’re trying to institute their own values on everyone else’s values … is gonna be concerning, and the president is gonna take issue with that on Sunday.” Continued Below

Miller further said that President Trump will talk about “the efforts that the administration had and the successes with vaccine distribution, the fact that we’re up to a million a day– doses being distributed when President Trump left office. … President Trump had us on the path to success with Operation Warp Speed”.

“If you’re a member of big tech or big media or the swamp monsters like Nancy Pelosi, you might not want to tune on Sunday. Everybody else, make sure to turn on your TV,” he poked fun.

“I think the only divide right now is between, you know, a half dozen maybe a dozen, beltway insiders and then the conservative grassroots and the rest of the country. The polling shows this is a very united Party, and not just a united Party, but a united conservative movement and a united ‘America First’ movement,” Jason Miller added.