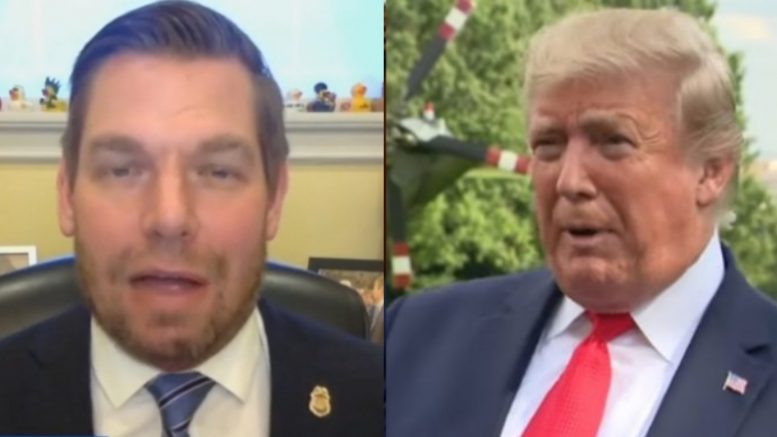 Democrat Congressman Eric Swalwell thinks that former President Donald Trump will “spend the rest of his life in civil and criminal courts”.

The representative from California was weighing in on Trump’s future just days before the 45th President is slated to deliver his first speech since leaving office at the annual Conservative Political Action Conference (CPAC) on Sunday.

“A twice impeached president who incited an attack on our Capitol that led to the killing of a cop as … I believe, has no business being at any gathering of any Americans. I think he’s gonna spend the rest of his years in civil and criminal courts,” Swalwell said on MSNBC Live With Ayman Mohyeldin.

While it’s suspected that Trump’s CPAC speech could be the first step in becoming the 2020 GOP Presidential Nominee, Rep. Swalwell said that his view falls in line with House Republican Conference Chair Liz Cheney, who admonished Trump earlier on Wednesday at a House GOP press conference.

Asked whether Trump should speak at CPAC, Rep. Cheney said, “That’s up to CPAC….I’ve been clear in my views about President Trump and the extent to which, following January 6th, I don’t believe that he should be playing a role in the future of the party or the country.”

Rep. Swalwell reiterated Cheney’s remarks in his MSNBC interview: “If they want to have him, that’s their right to do so. I’m more aligned with people like Liz Cheney who said today, standing next to Kevin McCarthy, that he shouldn’t have a role in our country.” Video Below

Meadows Reacts To Biden’s ‘No Federal Solution’ Confession: ‘All Talk, No Results, Pass The Buck–The Same As Biden’s 40 Other Years In Politics’