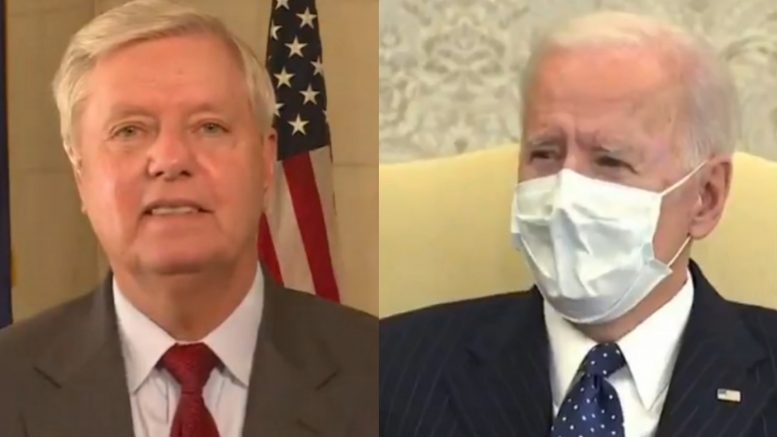 “The policy agenda coming out of the Biden Administration is beyond radical,” Sen. Lindsey Graham declared while appearing for an interview with Newsmax host Greg Kelly on Wednesday.

“Is Joe Biden really in charge?” Kelly asked after highlighting the stark contrast between Joe Biden’s moderate politics back when he served as Senator versus highly progressive actions seen in the first month of the Biden Administration.

In response, Sen. Graham mentioned that Biden has called for the end of President Trump’s policy on Mexico, which includes halting construction of the wall along the U.S. southern border. He also pointed out other moves that fall hand-in-hand with the far-left agenda, such as hiking the minimum wage to $15 and cancelling the Keystone Pipeline.

“So, I like Joe Biden, but the agenda is AOC, Pelosi, Schumer and Bernie Sanders. And I think we are going to win in 2022 cause what they’re doing on the border and by changing the remaining Mexico policy, you’re going to create a wave of illegal immigration like before you had Trump come in.

“I think that immigration will be the biggest issue in 2022 just like it was in 2016. I think if we get our act together, we’re going to take over the House and Senate.”

“So no, I don’t think that Joe Biden is in charge,” he concluded. Video Below

.@LindseyGrahamSC says he likes Joe Biden, but his agenda screams names like AOC and Pelosi.

"Immigration will be the biggest issue in 2022… if we can get our act together we're going to take over the House and the Senate." @gregkellyusa https://t.co/VlT7z8drtO pic.twitter.com/paEKWyNbm8