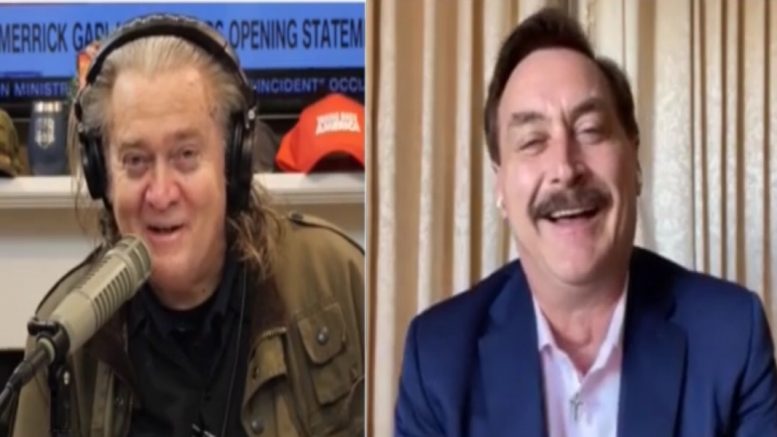 Dominion Voting Systems filed a $1.3 billion defamation lawsuit against MyPillow CEO Mike Lindell on Monday. The move comes in wake of Dominion threatening legal action against Lindell for continually accusing them of manipulating votes to help Joe Biden win the 2020 election, as previously reported by The Freedom Times.

Dominion’s lawsuit was filed in a U.S. District Court located in Washington D.C. and lists Mr. Lindell and his company My Pillow, Inc. as the defendants. The complaint alleges, in part, that Lindell was propagating a “lie” surrounding the 2020 election “with no real evidence” to “sell pillows.”

Mike Lindell reacted to Dominion’s lawsuit filed against him during a Monday interview on “War Room Pandemic”, telling host Steve Bannon, “They finally did. It’s a beautiful day here for America! I want everybody to know that.”

“This is a great day, because the truth is gonna come out. I don’t care how long it takes and how much money it costs me,” Lindell declared.

He told Bannon of Dominion, “I already have all the evidence. I’ve had a team on the ground this whole week where we went and validated all the IP addresses and the ID’s of the computers, both here and overseas, even in China. This has cost a lot of money to get people out there and it’s a lot of time, but we got that all validated.”

Lindell said a few reporters have watched the documentary he complied titled “Absolute Proof“, but noted “they won’t print it in their papers, or they won’t have me on their TV shows”.

“The ones who sit there and call it false or whatever, and even the ones who’ve seen it, it’s like an automatic word you gotta put in your articles: ‘unsubstantiated, unproven’. At least watch the film, right? Because I tell [reporters] … ‘You guys should be concerned. This should be the biggest story in history'”, he said. “One of the things right now that I’ve been telling them all morning, ‘Why don’t you all take your cameras down to Maricopa County in Arizona and find out why they won’t let them look at the machines and audit them?'”

Lindell also believes “100%” that Dominion is suing him to “shut him up”.

“I dare CNN, Fox, Newsmax– I dare any of you guys to have me on TV today to talk about Dominion. You wouldn’t let me talk before. How ’bout bring me on like you did, Steve? I dare all these other stations to have me on today,” he said.

AZ Sec. Of State Admits She’s Working With Other State Leaders To ‘Make Sure’ Audits Like AZ ‘Doesn’t Happen In Their States’