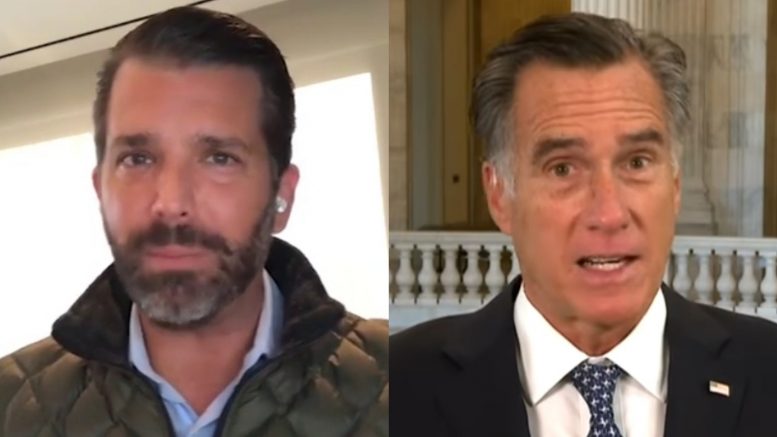 “Why doesn’t Mitt Romney just become a Democrat?” Donald Trump Jr. questioned in a selfie video posted to Rumble on Monday titled “I Am So Sick Of Mitt Romney.”

“Seriously, why doesn’t Mitt just become a Democrat,” he reiterated, “as I see more and more of the nonsense commentary, as I see sort of the historical decisions, as he himself has said he didn’t vote for Trump in 2020.”

“The people of Utah — which I believe is the second most conservative state in the union — believe in conservatism. And yet you seem to have someone that’s a cheerleader either for the Democrats or for Joe Biden and his ridiculous policies, but more importantly, someone who is simply too afraid to stand up to the media,” Trump Jr. said as he tied his thoughts to Sen. Romney’s failed presidential run in 2012.

“He was non-existent during the last few weeks of his presidential run. He lost. He still would rather be loved by those people who destroyed his presidential run, than actually represent the people of Utah,” Don Jr. said. “…That is pathetic. That is weak. But that shouldn’t surprise you.”

“But maybe if Mitt Romney became a Democrat, just maybe those same media personalities that truly hate his guts but would utilize him like their useful idiot so long as he’s going against Trump…maybe then they’ll like him for a few moments. Then the second he something that his conservative constituents would want, they’ll go back to hating him. But since he’s so desperate for that love and for their attention, Mitt Romney should just become a Democrat once and for all,” he concluded. Video Below

Sidney Powell: ‘Chaos’ in America ‘Has Been Planned for a Long Time’ & It Got to ‘Manifest Itself During the Trump Presidency’