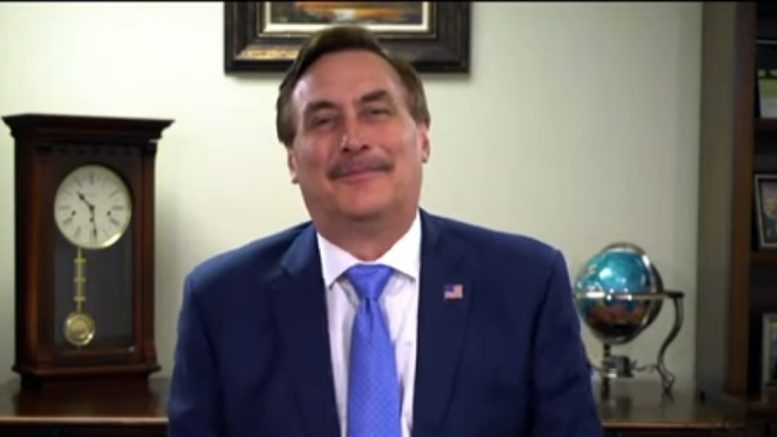 The move comes in wake of Dominion threatening legal action against Lindell for continually accusing them of manipulating votes to help Joe Biden win the 2020 election.

Dominion’s lawsuit was filed in a U.S. District Court located in Washington D.C. and lists Mr. Lindell and his company My Pillow, Inc. as the defendants.

The complaint alleges that Lindell was propagating a “lie” surrounding the 2020 election “with no real evidence” to “sell pillows.”

“MyPillow’s defamatory marketing campaign——has increased MyPillow sales by 30-40% and continues duping people into redirecting their election–lie outrage into pillow purchases,” Dominion wrote in part of their lawsuit. See Below

The official complaint from Dominion states as follows:

1. After hitting the jackpot with Donald Trump’s endorsement for MyPillow and after a million-dollar bet on Fox News ads had paid out handsome returns, Michael Lindell exploited another chance to boost sales: marketing MyPillow to people who would tune in and attend rallies to hear Lindell tell the “Big Lie” that Dominion had stolen the 2020 election. As when MyPillow previously faced legal action for deceptive marketing campaigns, Lindell knew there was no real “evidence” supporting his claims. And he is well aware of the independent audits and paper ballot recounts conclusively disproving the Big Lie. But Lindell—a talented salesman and former professional card counter—sells the lie to this day because the lie sells pillows. MyPillow’s defamatory marketing campaign—with promo codes like “FightforTrump,” “45,” “Proof,” and “QAnon”—has increased MyPillow sales by 30-40% and continues duping people into redirecting their election-lie outrage into pillow purchases.

3. Most importantly though, paper ballots are the hard evidence conclusively disproving Lindell’s claims. If the vote tallies in Dominion machines had been manipulated, the machine tallies would not match the number of votes on the paper ballots. In fact, they do match, as independent audits and hand recounts have repeatedly proven. The contrary “evidence” put forward by Lindell’s allies—including Sidney Powell, L. Lin Wood, and others—was deliberately misrepresented, manufactured, cherry-picked, and sourced from con artists and conspiracy theorists who were judicially determined to be “wholly unreliable.” Lindell knows all of this because Dominion wrote to him multiple times, put him on formal written notice of the facts, and told him that Dominion employees were receiving death threats because of the lies.

4. Instead of retracting his lies, Lindell—a multimillionaire with a nearly unlimited
ability to broadcast his preferred messages on conservative media—whined that he was being “censored” and “attacked” and produced a “docu-movie” featuring shady characters and fake documents sourced from dark corners of the internet.

5. Through discovery, Dominion will prove that there is no real evidence supporting
the Big Lie. Dominion brings this action to vindicate the company’s rights, to recover damages,to seek a narrowly tailored injunction, to stand up for itself and its employees, and to stop Lindell and MyPillow from further profiting at Dominion’s expense.

Related Article: Dominion Reportedly Threatens To Sue Lindell ‘Imminently’, MyPillow CEO Reacts: “If They Sue Me, I Would Be So Happy”