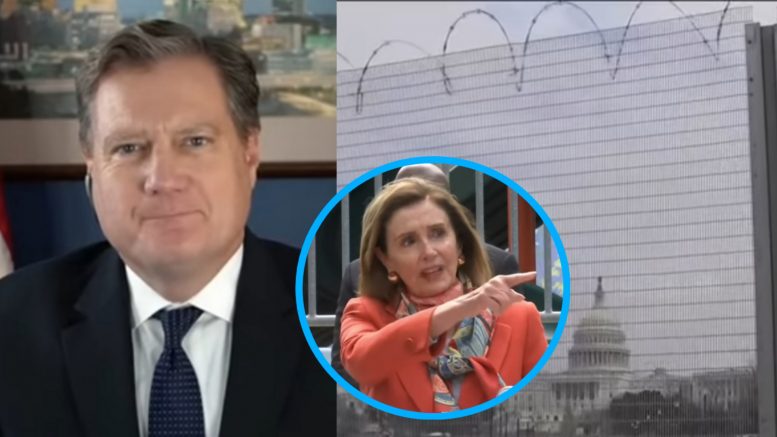 “This is absolutely unnecessary and the American people know it,” Congressman Mike Turner declared in regards to the razor-wire fence that still stands around the Capitol.

The U.S. military constructed the “wall” as a security precaution immediately following the riot at the Capitol building, and it was ordered to remain in place for no less than 30 days, Army Secretary Ryan McCarthy announced on January 7th.

While the fate of the fence remains unclear, over 40 lawmakers have been pressuring House Speaker Nancy Pelosi to remove the fence out of fears that it could remain permanent.

In his Sunday interview on Fox News, Rep. Mike Turner (R-OH) told Maria Bariromo that based on information obtained from his role on House committees, he believes the Capitol fence still remains intact because it’s part of Democrats’ “narrative of fear.”

“When in 9/11 when the Capitol itself was a target, we didn’t go to a wall and razor wire throughout the Capitol,” Rep. Turner said.

“This is absolutely being done by Nancy Pelosi, and remember this is a woman who said walls are ‘immoral’ to protect the American public and our border. And now we have this wall all of the way around the Capitol,” he added.

Related Article: AOC Claims Sen. Cruz Is Responsible For The Capitol Building Riot, Cruz Fires Back: “You Are A Liar”

“I believe it’s part of their narrative of fear,” Rep. Turner said. “They want to project fear of the American public. And even so you know, we have metal detectors now going to the House floor to vote — fear of even their other members of Congress.”

Pelosi Says She Wants ‘Credit’ For Allowing Iowa GOP Rep. Miller-Meeks To Be Seated In Congress