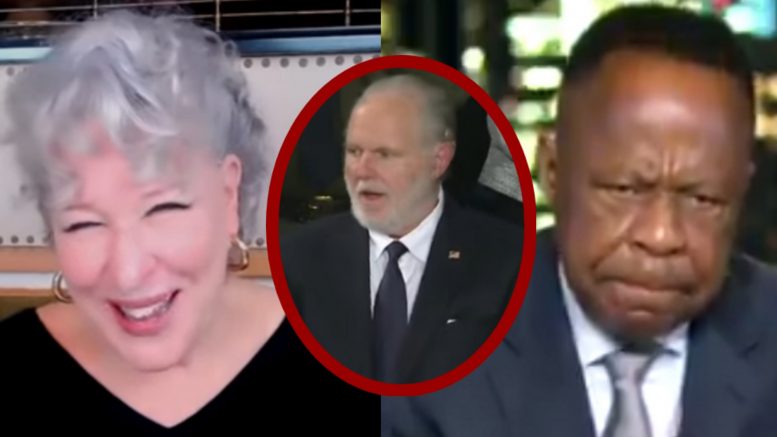 #RushLimbaugh has gone to his reward. Bet it’s hot.

In response, Leo Terrell declared that Rush “was a true American who loved this country.”

But as for Midler and other Democrats, “They demonize Republicans,” Leo told Judge Jeanine. “They try to make us the bad guy.”

He continued: “In order, again, for the Democrats to maintain control over their minions…they have to make us look like the bad guys. That’s why they use wedge issues like race. And I’ll tell you right now, it doesn’t work because most of Americans live outside of the west coast and the east coast. Middle America understands American values. The Democrats want to take American values away and turn this nation into a socialist state by demonizing Republicans.”

The remarks by Mr. Terrell echoed his earlier thoughts on Alexandria Ocasio-Cortez for suggesting that the Texas winter crisis could have been prevented if leaders adopted Green New Deal policies.

“AOC and the Democrats have to demonize Republicans. We may disagree with them as Republicans, but they hate us. It’s a hatred in order for them to gain power, for them to contain their contituents.

“They must try to demonize anybody with an ‘R’ on their name. And that’s what’s dangerous about the Democrats. They use wedge issues like the Green New Deal, like the race card to demonize Republicans and that’s scary because it makes it sound like the Democrats are the alternative. In fact, they are an extreme example of going to the left if you go their way.”

.@TomiLahren and @TheLeoTerrell discuss the week’s most outrageous comments made by Democratic politicians. pic.twitter.com/j9X2pxJdIx

Huckabee On Why Dems Limit How Much Biden Talks: “Everytime He Does, He Just Opens His Mouth To Change Feet”