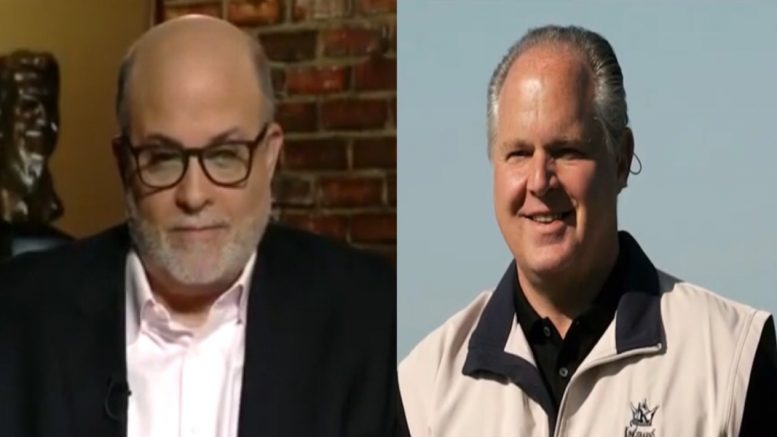 Conservative icon Rush Limbaugh, who single-handedly created the era of national political talk radio and had the most listened to program in U.S. history, died Wednesday of lung cancer a year after announcing his diagnosis with the disease. He was 70, Newsmax reported.

Limbaugh’s wife, Kathryn, made the announcement on his radio show.

Mark Levin responded Wednesday, shortly after the announcement that Rush Limbaugh had passed away from his year-long battle with lung cancer, expressing that the late conservative talk show giant was “one of his best friends”.

“Very, very happy of the outpouring support for him, and in many ways, he would be shocked by it,” Levin said. “People say he was a very regular guy. He was a regular guy, but he was utterly inquisitive, curious all the time. He had a huge library in his home. He read the great philosophers. This is a man who never went to college, and he didn’t need to go to college. … He became an expert on the Constitution, the history of the nation, all self taught.”

“He was as kind as kind could be. … [He] was a tremendous gentleman. … He smiled, he laughed,” Levin said of Limbaugh.

“I think, what was it that attracted him to Donald Trump? You know, a lot of us were eventually attracted, but you know, he was attracted early on. And I think it’s this: Trump was an outsider. Trump was rejected by the elites. They said Trump couldn’t succeed. They all said the same thing about Rush, and I think Rush identified with that in many respects,” Levin said. Continued Below

“And I also think Rush felt ‘Why should we be controlled and hindered by what the left or by what the mainstream media tell us what’s okay, what language we can use, what we can discuss. This is America. We are free, human individuals, human beings. And he didn’t think it was terribly controversy to be an old time defender of the country. He was an absolute patriot,” Levin expressed.

“When I think of Rush, generally … he’s near the top of the greatest people I’ve ever known. … He was not just a broadcaster, he was an activist. He had his own way of encouraging people to do certain things. He was to some a fatherly figure, to some people a brotherly figure, to some people like a son. But he was always good ole Rush,” he told Fox News’ Martha MacCallum.

(Related: 45th President Trump On Rush Limbaugh’s Passing: “Patriot, A Defender Of Liberty & Someone Who Believed In All Of The Greatness Our Country Stands For”)