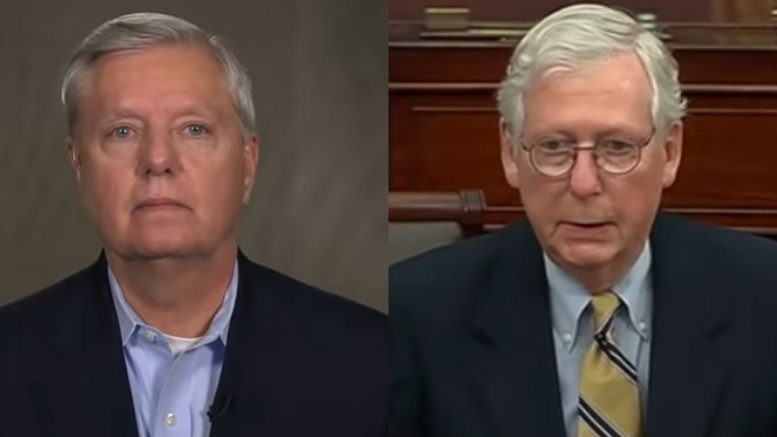 “Senator McConnell’s speech Saturday I don’t think is widely shared view of President Trump by most Republicans,” Senator Lindsey Graham proclaimed while weighing in on the feud between Senate GOP Leader Mitch McConnell and former President Donald Trump and what it means for the Republican Party moving forward.

On the flipside, however, Sen. Graham claimed that McConnell was “indispensable to Donald Trump’s success.”

“Mitch McConnell got the tax cut through — a massive tax cut — with a two-vote Republican majority. Mitch McConnell was much to credit for Amy Coney Barrett as any single person. Mitch McConnell working with Donald Trump did hell of a job,” Sen. Graham declared. “They’re now at each other’s throat. I’m more worried about 2022 than I’ve ever been. I don’t want to eat our own. President Trump is the most consequential Republican in the party. If Mitch McConnell doesn’t understand that, he’s missing a lot.”

The remarks from Graham came just hours after Trump released a scorching statement on Tuesday, slamming McConnell for berating him in a speech after Trump was acquitted in the Senate impeachment trial.

Although McConnell voted to acquit the former president of the impeachment charge against him, the Senate minority leader claimed that Trump’s actions after the presidential election were “unconscionable” and foreshadowed that Trump still could face accountability for his actions in criminal courts. The 45th President fired back by naming Senator McConnell as a “dour, sullen, and unsmiling political hack,” adding that the GOP would “never again be respected or strong” with McConnell steering the wheel.

“My beef isn’t with Mitch McConnell cause he has the same policy views I do,” Sen. Graham told Sean Hannity in response to the inner-party feud. “My beef is that we need to knock this off.”

After pointing out a new poll indicating that 74% of Republicans want President Trump to remain the leader of the party, Graham said: “What I would say to Senator McConnell: I know Trump can be a handful, but he is the most dominant figure in the Republican Party. We don’t have a snowball’s chance in hell of taking back the majority without Donald Trump. If you don’t get that, you’re just not looking. He was a hell of a President on all of the things that conservatives really believe in.”

He continued: “It was a consequential presidency. I’m sorry of what happened on January the 6th. He’ll get his fair share of blame. But to my Republican colleagues in the Senate, let’s try to work together. Realize that without President Trump, we’re never going to get back in the majority. And to President Trump, you’re going to have to make some changes for you to reach your potential.”