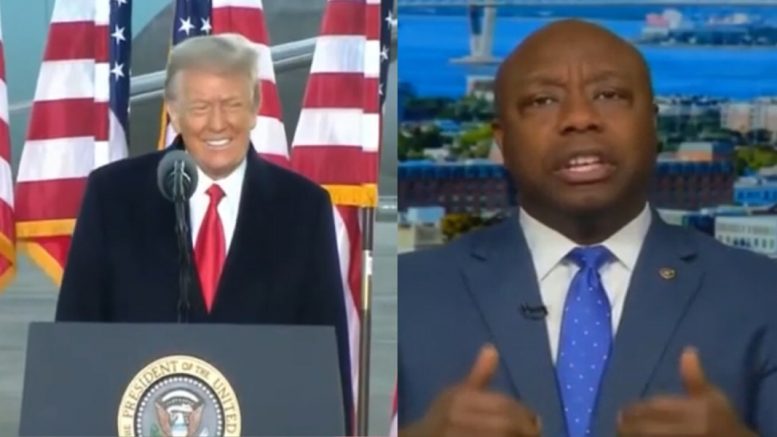 Senator Tim Scott (R-SC) on Monday, told Fox News that former President Donald Trump “is simply not guilty”, when discussing the Senate impeachment trial that will begin in the Senate Tuesday.

The House voted January 13 to impeach the 45th Commander in Chief 232 to 197, with 10 Republicans joining all Democrats. The Senate will need a two-thirds majority, or at least 67 votes, to convict the former president, an outcome which is not likely to happen.

“I was in the chamber when the rioters were coming over. I was taking my jacket off, my tie off, rolling my sleeves up, just in case I had to fight,” Senator Tim Scott said. “The changes of me understanding and appreciating the severity of the situation is 100%”.

Senator Scott believes that the “Democrats should put the blame where it stands, where it should be”, adding, ,”And it does not have to do with the president, who said, ‘Go peacefully to protest'”.

In his speech on January 6, President Trump told supporters in part, “I know that everyone here will soon be marching over to the Capitol building to peacefully and patriotically make your voices heard.” Video Below

Sen. Tim Scott went on to slam the double standard of political speech:

Senator Rand Paul (R-KY) last month, made a point of order alleging that the impeachment trial is contrary to the Constitution — an argument that multiple Republican senators have made. That forced a vote on the point of order, requiring senators to go on the record about whether they believe the trial is constitutional

The Senate voted 55-45 to end debate on Senator Paul’s point of order, arguing that the impeachment trial is unconstitutional now that President Trump is out of office.

Five Republican senators, however, voted not to dismiss the impeachment trial of President Trump: Susan Collins (ME) Lisa Murkowski (AK) Ben Sasse (NE) and Pat Toomey (PA) and Mitt Romney (UT). They voted with all 50 Democrat senators to table the point of order.

Gov. Kristi Noem Reacts After Trump Announces He Will Travel To Mount Rushmore July 3 For Fireworks