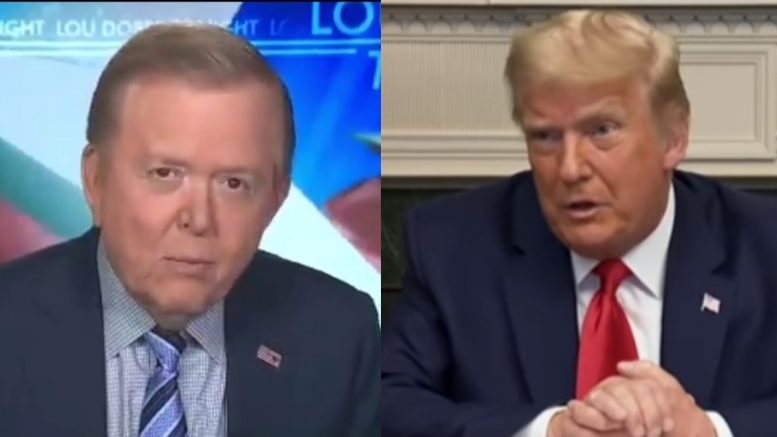 President Trump issued a statement after longtime television host Lou Dobbs was unexpectedly cancelled on Friday by Fox Business after a 10-year stint, where his show “Lou Dobbs Tonight” became the highest-rated show on the network.

The move came one day after Fox and Mr. Dobbs were named in a $2.7 billion defamation lawsuit brought by Smartmatic, a voting software company used in U.S. elections, NBC News reported.

In response, former President Donald Trump issued the following statement: “Lou Dobbs is and was great. Nobody loves America more than Lou. He had a large and loyal following that will be watching closely for his next move, and that following includes me.”

TRUMP statement on LOU DOBBS:
“Lou Dobbs is and was great. Nobody loves America more than Lou. He had a large and loyal following that will be watching closely for his next move, and that following includes me.” – Donald J. Trump, 45th President of the United States

Lou Dobbs replied to the 45th President after learning of his remarks:

Thanks for your kind words Mr.President. God bless you and all the American patriots who make this country great. https://t.co/7aPPQMl898

A Fox News spokesperson is quoted as saying,
“As we said in October, Fox News Media regularly considers programming changes and plans have been in place to launch new formats as appropriate post-election, including on Fox Business — this is part of those planned changes.”

“A new 5PM program will be announced in the near future,” they added.

Here are some additional reactions to Lou Dobbs departure from Fox Business:

.@LouDobbs is a truly great American, a consummate journalist, a committed Christian, and a treasured friend. Next to Sunday mornings, visiting with Lou Friday nights has been the highlight of my week for 5 years. Thanks Lou!

Always a great experience being on with you @LouDobbs pic.twitter.com/hHEtDcS6Di

Have to pause to thank my friend and someone who helped start my career, and put me on TV more times than I can count!

I know the best of Lou Dobbs is yet to come!

All my best in your next endeavor, @LouDobbs! https://t.co/j1EoxSAGHc via @dailycaller

⁦@LouDobbs⁩ is one of the best anchors in the business.

Fox is in a race with itself to the bottom. https://t.co/gvIPhp7ya4

@LouDobbs, you won’t be missed simply because we will still follow you! Keep up the great journalistic work. Whatever your endeavors may consist of now, I personally wish you nothing but the absolute best, sir!

.@LouDobbs is a good man and always treated me with immense kindness and generosity. I was supposed to come on his show in the next few weeks and am sad to see it has been canceled. He has been in the business for decades and I hope to see him on air again soon.

Canceling @LouDobbs was a grave mistake. Thanks Lou for having me on early in my career for my book and for being a constant professional and patriot.

Because he is a truth teller…@LouDobbs is a threat to the giant cabal
https://t.co/iWy30RLsLv

He speaks the Truth.

He doesn’t back down.