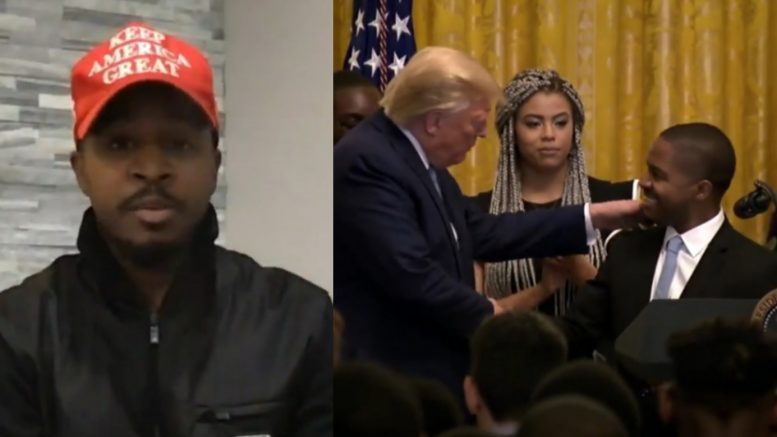 Comedian Terrence Williams’ support for President Donald Trump remains stronger than ever and he will still consider Trump to be his president for the next four years despite Joe Biden being sworn in on January 20th.

Mr. Williams — whose viral pro-Trump videos helped propel him to social media stardom during Trump’s term in office — indicated why he will continue to back President Trump “100 percent” regardless of “whatever he decides to do.”

“I still support President Donald J. Trump and I still refer to him as president. He will always be my president,” Terrence told Newsmax host Greg Kelly on Monday.

“The loony liberals screamed that he wasn’t their president for four years, so for the next four years I will be saying that he is my president,” he added. “I have his back and whatever he decides to do next, I will support him 100 percent.”

One of the most appealing aspects about the 45th president that has stuck out the most for Terrence is how Trump considered him to be part of his family. As an example, Williams reflected on a time when he ate dinner with the Trump family.

Related Article: Obama Claims Trump ‘Shows No Interest In Putting In The Work’, Terrence Williams Fires Back: “Shut Up!”

“President Trump and his family treated me like I was part of their family,” Terrence said. “I sat at the table with President Trump, and he didn’t have to sit me at his table. He did that because he is just a genuine, down-to-earth guy. And I told the president, I said, ‘Mr. President, I don’t want to sit at this table for too long because I want you to enjoy time with your family.’ He said, ‘No, you are family also.’ He said I was his family.”

“I mean, these people are so down-to-earth. And for the loony liberals and the fake news to say horrible things about them is absolutely disgusting and defamation. I mean, they should sue these people,” he concluded. Video Below

STANDING BY TRUMP: Comedian @w_terrence on his personal bond with the Trump family and why the media had it all wrong. https://t.co/VlT7z8v2lm pic.twitter.com/iJNN2c02Wj