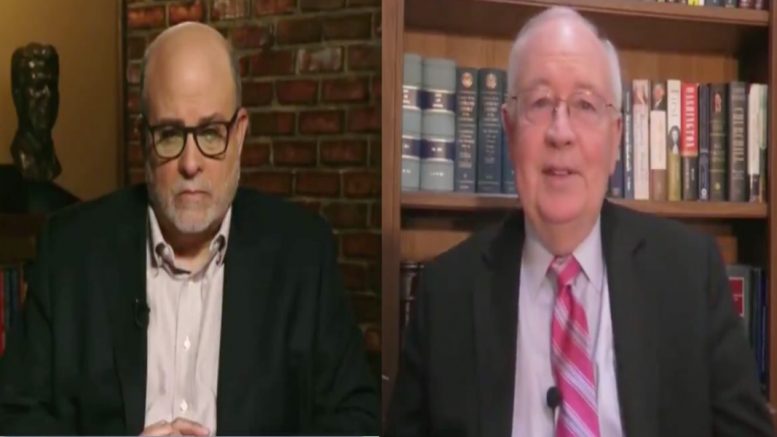 “The text of the Constitution to me is absolutely clear, that judgement in cases of impeachment runs to what removal and then possible disqualification. A former officer by definition can’t be removed. That’s the text,” Starr said.

“The text is supported by our constitutional history. The only president is history to have resigned is Richard Nixon. … Upon resignation, [he] flew to San Clemente, California and that was it. The House of Representatives, which was considering Articles of Impeachment, then stopped the proceeding,” Ken Starr told Levin.

“When the President of the United States is the subject of impeachment, according to the Constitution, the Chief Justice shall preside, not he should be invited to preside– shall preside,” Starr explained. “We now know that Chief Justice Roberts, at least from reports, is not going to be presiding over the trial of now a private citizen.”

Starr highlighted his “key point”, arguing, “The Senate is utterly without jurisdiction to try Donald Trump and if they proceed to do so, they will, I believe, be running a foul, at least potentially, of the Constitutions specific expressed prohibition against a bill of attainder. Simply put, a bill of attainder is the legislative branch imposing punishment on a prior citizen. And that’s what disqualification would be all about.” Continued Below

“And what was the Constitution aimed at? Just like the Declaration of Independence, it was mindful of history of abuses of the crown, but also of parliament. And the proponents of the eternal impeachment process, which I’ve seen someone say, ‘Well, let’s now have an impeachment of [former] Secretary of State Hillary Clinton’. Excuse me. She’s no longer the secretary of state. … [Former] President Obama– excuse me, he’s not the President of the United States. Ditto for Donald Trump,” Starr said. Video Below

“Parliamentary history is interesting, but it’s not dispositive. What’s dispositive is the text and moreover we have to remember, Mark, as you well know, parliament engaged in numerous abuses, including of the impeachment power. It’s one of the reasons I believe the text was so clear– that impeachment and judgement impeachment, runs only to removal, and then potential disqualification,” Starr explained.

“This has gone off the rails of our Constitution. And frankly, I think it should be stopped. My own view is: I’m not the president’s lawyer. I had the honor of doing legal service in the first round of impeachment– the whole thing should be stopped by the judiciary. Will they? Who knows, but they should, because it’s a totally, in my view, … anti-constitutional effort,” he said.

“The Senate has no jurisdiction and the House allowed that, right? … The House returned and voted on the Article of impeachment one week before the president left office. … They let the time run out. You don’t continue when the time has expired. They should’ve marched the Article of Impeachment over and started the trial immediately, but they didn’t. And the Senate should’ve started the trial,” Starr added.

"The Senate is utterly without jurisdiction to try Donald Trump." pic.twitter.com/plxF0k7Pqs

(Related: Levin: “This Election Has Exposed The Complete Collapse Of The Judiciary As A Check On Unconstitutional Acts”)