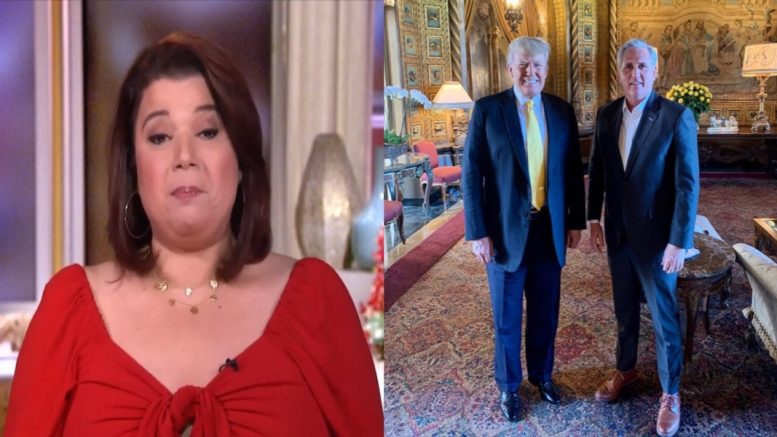 Friday on liberal ABC’s “The View”, co-host Ana Navarro vented her irration at House Minority Leader Kevin McCarthy (R-CA) for visiting former President Donald John Trump at Trump’s Mar-a-Lago club in Florida on Thursday, where the two had discussed Republican efforts to take back the House in 2022.

McCarthy released a statement after meeting with the 45th president, saying in part, “Today, President Trump committed to helping elect Republicans in the House and Senate in 2022. A Republican majority will listen to our fellow Americans and solve the challenges facing our nation. Democrats, on the other hand, have only put forward an agenda that divides us — such as impeaching a President who is now a private citizen and destroying blue-collar energy jobs. For the sake of our country, the radical Democrat agenda must be stopped.”

Joy Behar told her colleague Ana Navarro during Friday’s airing of “The View”, “House minority leader, the fabulous Kevin McCarthy, told Republicans to cut the crap and stop fighting with each other before he went down to Florida to kiss Trump’s ring. … What’s going on here Ana?”

Navarro vented her irritation at Kevin McCarthy for visiting President Trump, claiming the House Minority Leader is “owned by his master” Donald Trump, and suggested it is “White slavery”.

“This has been such a sad week for the Republican Party, because when they had a chance to get rid of the cross that they’ve been bearing with, Donald Trump, who has divided the party and opened it up for all sorts of nut jobs to come into the party,” Navarro alleged.

“Instead, what we see is Kevin McCarthy, who has been all over the place, going down– making a pilgrimage to I guess– what I guess is going to become now the Republican Mecca. I call it ‘far-a-lago'”, she said. Continued Below

(Related: Fmr. President Trump Releases A Statement After Meeting With McCarthy At Mar-a-Lago)

After displaying a picture on the screen of President Trump and McCarthy standing next to each other at Mar-a-Lago, Navarro asked, “Can we just talk about the interior? I mean, it’s like what? Bordello? Vintage Bordello look?”

“And so, you know, he went down there to make nice with Donald Trump because Donald Trump is threatening to open up a third party if Republicans don’t continue kissing his ring among other body parts,” Navarro falsely claimed as President Trump has no plans to start a third political party, according to Trump’s 2020 campaign senior adviser Jason Miller. Video Below

“I think that’s pathetic. I think that’s– I think, you know, that’s white slavery what I just witnessed from Kevin McCarthy. He looks like he’s owned by his master. His master is Donald Trump. It is is pathetic,” Navarro vented.