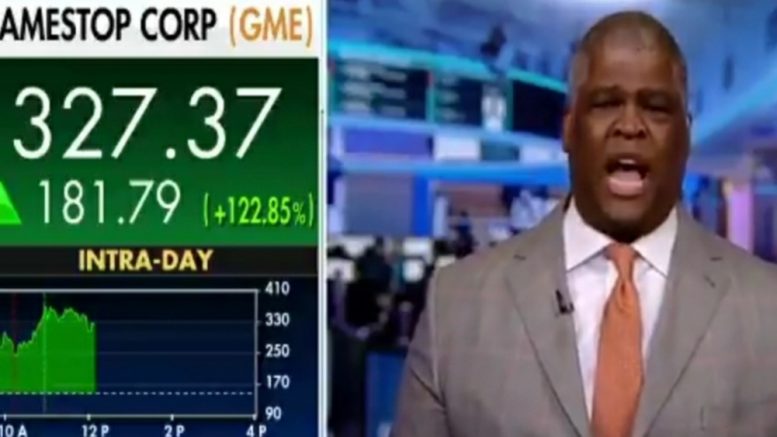 Fox Business host Charles Payne had some words for hedge funders and others on Wall Street who are “whining” after GameStop’s wild ride on the stock market.

This week, small-time investors, driven by the Reddit page /r/wallstreetbets, skyrocketed the price of GameStop by buying shares of it in bulk after learning hedge funds were “shorting” the stock.

The turbulence with the stock price led to hedge fund companies losing billions of dollars, while many small buyers relished substantial increases. At one point, the Robinhood stock trading platform froze the ability of its users to trade shares of GameStop and other similar stocks that are being targeted, in a way to control the frenzy, according to the Post’s report.

“All of this nonsense, all of this whining by Wall Street — it’s making me sick!” Payne said. “140% of GameStop was short. I didn’t hear one person on TV complaining about Wall Street trying to crush GameStop — 140% short! I told my subscribers, ‘Buy this stock,’ and they made a fortune.”

He continued, “You can’t allow Wall Street to short 75% of the stock and nobody says anything — crush these companies into the dirt. And then when an individual makes money, everyone’s up in arms.”

Payne then answered to companies, like Robinhood, that are trying to control the situation by changing the rules out of fears that people will ‘lose their shirt’ by jumping in the market without knowing the risks. “Don’t you think people are trading? They’ve been trading 80 billion shares today. People are ringing the register,” Payne said. “I have a kid who bought a house. He made $50,000 and bought a house.”

“So yea, some people are gonna lose and some are gonna win. But if they want to change the rules of the game now because the general public is making money after decades of shorts crushing thousands of stocks into the dirt,”Payne said. “I have watched stocks get crushed completely to zero, and no one’s ever whispered anything because those stocks didn’t have Wall Street sponsorship…shorts have had their way with the market for decades. No one’s ever complained about it.”

“So, I am thrilled!” he exclaimed. “If you are going to try to destroy a company by shorting a 140% of its stock, you have to accept that individual investors are playing the same game as you’re playing and you’re losing.”

In ending, here are some more reactions to GameStop’s big day:

Am I doing this right??? I’m told those are the rules. 🚀🚀🚀 #wallstreetbets @stoolpresidente

Imagine trying to explain Gamestop and Reddit to Joe Biden