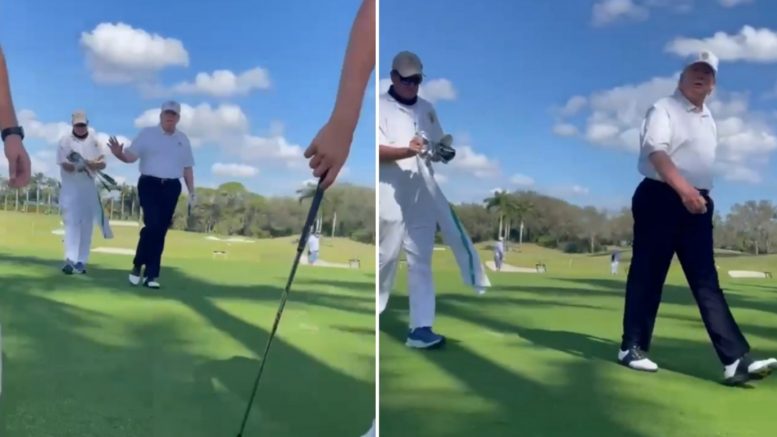 Former President Donald Trump was caught on camera at the golf course and had quite the response after being thanked for his services by a man who was filming.

A video of the brief exchange has since gone viral on Telegram.

Wearing a white hat, white shirt and dark pants, Trump is seen walking away from the driving range area with other golfers and a caddie, and waves at the man filming.

“Mr. President, thank you for your service, sir,” the man is heard telling Trump.

Trump taps the top his leg twice and responds, “Thank you very much. Thank you. We haven’t finished yet.”

“Good, good,” the man says back. Video Below

The video upload of Trump’s golf course sighting came two days after he opened the “Office of the Former President,” which in a press release was described as being “responsible for managing President Trump’s correspondence, public statements, appearances, and official activities to advance the interests of the United States and to carry on the agenda of the Trump administration through advocacy, organizing, and public activism.”

While it still remains unclear what his full intentions are moving forward, the 45th President told the Washington Examiner, “We’ll do something but not just yet,” before dining at the Trump International Golf Club in Florida last Friday.