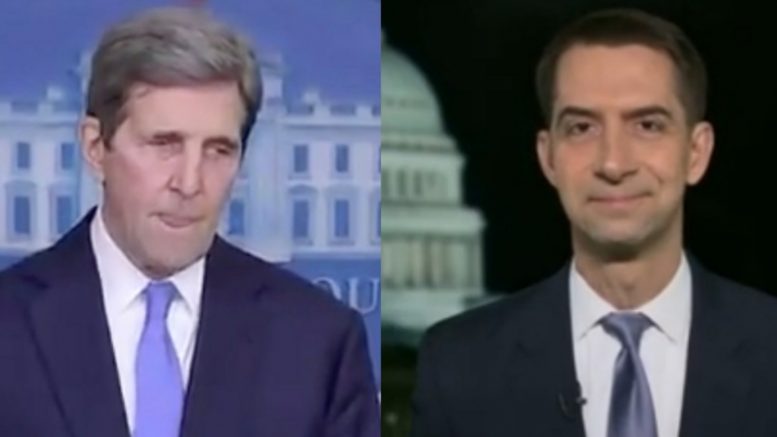 Sen. Tom Cotton exposed the high level of hypocrisy behind remarks made by John Kerry at a press conference on Wednesday.

Asked what his message would be to oil and gas workers who “see an end to their livelihoods,” Kerry responded, “What President Biden wants to do is make sure that those folks have better choices… That they can be the people to go to work to make the solar panels.”

He also claimed that changes in the energy sector are completely necessary to deal with the climate “crisis” and that industrial and energy sector workers are victims of a “false narrative” that originated from President Trump’s economic policy.

“It is a crisis,” Kerry declared.

In response, Senator Tom Cotton tweeted: “John Kerry—who flies in private jets, owned a 76-foot yacht and several mansions—has the carbon footprint of a small nation. Yet he tells energy workers to ‘make solar panels’ when the Biden administration kills their jobs.” See Below

John Kerry—who flies in private jets, owned a 76-foot yacht and several mansions—has the carbon footprint of a small nation.

Yet he tells energy workers to "make solar panels" when the Biden administration kills their jobs. pic.twitter.com/QhK2FVykxU

According to Fox News, report:

“Federal Aviation Administration (FAA) records indicate that the family of U.S. Special Envoy for Climate John Kerry owns a private jet, despite his position on combatting fossil fuels in the new administration.

“…While it’s unclear exactly how much Kerry benefited from his wife’s company, private jets have been estimated to emit upward of 40 times as much carbon per passenger as commercial flights.”

In 2017, Kerry and his wife reportedly shelled out $11.75 million on 18 acres of exclusive waterfront property on Martha’s Vineyard — quite the purchase for someone who feels like the world is in the middle of a climate-related “crisis.”

So will John Kerry be moving from Martha's Vineyard which is a prime target for sea levels rising or nah? https://t.co/qHpTNGFXxG pic.twitter.com/L6tWWHKCeG