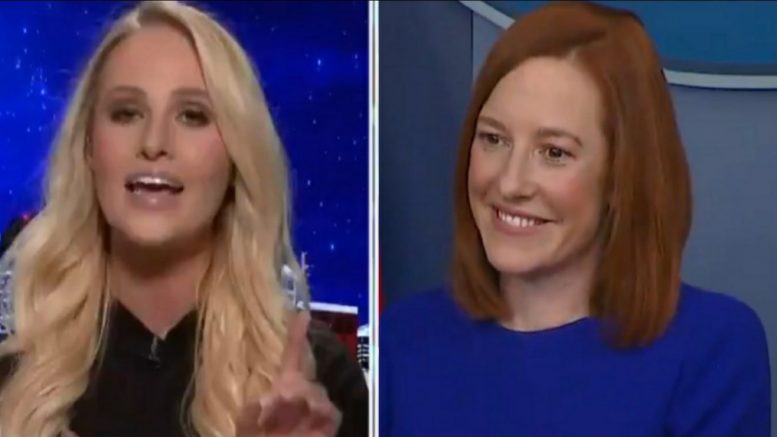 “You know, I think that a blind man can see that,” Tomi Lahren said when asked by Judge Jeanine Pirro if she noticed the “double standard” at the Biden Administration’s first two White House press briefings.

Tomi pointed out how so-called ‘journalists’ appear to be playing “softball” with White House Press Secretary Jen Psaki versus the negative treatment and hard line of questions often given to press secretaries who served under President Trump.

Lahren anticipates that the “cuddle fest” seen at this past week’s press briefings is just a small sample of how the media will treat President Biden and his administration over the next four years.

“I anticipate four years of asking Joe Biden what he ate for breakfast, asking Kamala Harris what she plans to have for dinner — I mean to call this softball is an understatement,” Tomi Lahren told Judge Jeanine on Saturday. “This is a cuddle fest. We know it’s going to be a cuddlefest. This is going to be a four year vacation for these so-called journalists.”

“Like we’ve said time and time again — if you are biased, if you like Joe Biden, you’re a liberal, you’re a Democrat, that’s fine. Go ahead and be that, but just be honest about it. Don’t confuse the American people and try to pass yourself off as some kind of a neutral journalist because we all know, clearly, by that first press briefing and every press briefing we’re going to see thereon after that they’re not going to ask Joe Biden any tough questions. They’re not going to ask this press secretary any tough questions. And, if you’ll notice, when she is asked a tough question, she gets irritated like, ‘How dare you question me?'”

“It’s compliance that they want and unfortunately, compliance is probably what they are going to get,” Tomi concluded. Video Below

Fox Nation Host @TomiLahren and Civil Rights Attorney @TheLeoTerrell
discuss how White House Press Secretary Jen Psaki is being treated much differently by the press than Sean Spicer and if the Biden administration is going to take away our Second Amendment rights. pic.twitter.com/h2phtVte8O

Pastor Jeffress: The God That Leftists Believe In Is “The God Of Their Imagination, Not The God Of The Bible”