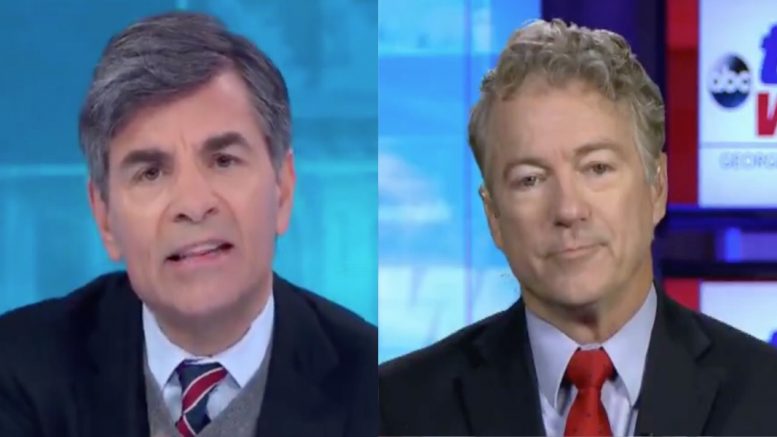 Senator Rand Paul (R-KY) on Sunday, sparred with host George Stephanopoulos during an interview on ABC News’ “This Week” over the 2020 November presidential election, declaring that there was a “great deal of evidence of fraud” and suggested that the illegal election law changes done by secretary of states merit a “thorough investigation”.

In the heated exchange, Senator Paul fired back at ABC News host for alleging Republicans were “fed a big lie by President Trump” in regards to the election.

George Stephanopoulos told Senator Rand Paul, “This election was not stolen. Do you accept that fact?”

The Kentucky Senator replied, “The debate over whether or not fraud should occur, we never had any presentation in court where we actually looked at the evidence. Most of the cases were thrown our for lack of standing, which is a procedural way of not actually hearing the question. There were several states in which the law was changed by the secretary of state and not the state legislature. To me, those are clearly unconstitutional.”

“I think there’s still a chance that those do actually work their way up to the Supreme Court. Courts traditionally and historically don’t like to hear election questions. But yes, were there people who voted twice? Were there dead people who voted? Were there illegal aliens who voted? Yes. And we should get to the bottom of it,” he said.

Stephanopoulos argued against Senator Paul’s assertions by peddling Democratic talking points: “There were 86 challenges filed by President Trump and his allies in court, all were dismissed. Every state certified the results after an investigations, counts and recounts. The Department of Justice led by William Barr said ‘There’s no widespread evidence of fraud’. Can’t you just say the words, ‘This election was not stolen?'” Continued Below

Senator Paul disagreed with Stephanopoulos’s talking points, suggesting to the ABC News host: “If we want greater confidence in our elections and 75% of Republicans agree with me– is that we do need to look at election integrity, and we do need to restore confidence in the elections.”

Stephanopoulos then told the Kentucky Senator that “75% of Republicans agree with you because they were fed a big lie by President Trump and his supporters who say the election was stolen”, begging, “Why can’t you say President Biden won an legitimate and fair election?”

Senator Paul fired back: “I think where you make a mistake… people coming from the liberal side like you– you immediately say everything is a lie, instead of saying there are two sides to everything. Historically, if I said there was fraud, you would interview someone else who said, ‘There wasn’t’. But now, you insert yourself in the middle and say the absolute fact is that everything I’m saying is a lie– when I said examine the facts and we’re going to.” Video Below

GS: “There are not two sides to this story. This has been looked at in every single state.” https://t.co/kEzanF2Ysi pic.twitter.com/DDufLZvwBB

“You’re saying there was absolutely no fraud and that it’s all been investigated. That’s just not true. You say it’s all a lie. You say we’re all liars. You’re just simply saying we’re all liars. We didn’t have a debate. … You’re right and we’re all wrong,” Senator Paul told Stephanopoulos as the ABC host kept interrupting him.

“I won’t be cowed by liberals in the media who say there’s no evidence here and you’re a liar if you talk about election fraud,” he continued. “Let’s have an open debate this is a free country.”

Senator Paul agreed that former Attorney General William Barr said there was no evidence of fraud in the election, but called that determination “a pronouncement”, adding, “There’s been no examination, thorough examination of all the states to see what problems we had and see if they could fix them”. Continued Below

“I voted to certify the state [Electoral College votes] because I think it would be wrong for Congress to overturn that. At the same time, I’m not willing to just sit here and say, everybody on the Republican side is a liar and there’s no fraud,” he insisted. “No. There were lots of problems and secretaries of state who illegally changed the law and that needs to be fixed, and I’m going to work hard to fix it”.

“And I won’t be cowed by people saying, ‘Oh you’re a liar’. That’s the problem with the media today is they say all Republicans are liars and everything we say is a lie. There are two sides to every story. Interview somebody on the other side, but don’t insert yourself into the story to say we’re all liars because there was fraud in the election that needs to be fixed,” Senator Paul argued.

Stephanopoulos claimed there are “not two sides to the story”, alleging, “This is been looked at by every single state”.

“Well sure there are. There are two sides to every story,” Senator Paul fired back. “George, you’re forgetting who you are as a journalist if you think there’s only one side. You’re inserting yourself into the story to say, ‘I’m a liar because I want to look at election fraud and I want to look at secretaries of state, who illegally changed the voter laws without the permission of their state legislature”. Continued Below

“That is incontrovertible and it happened. You can’t just sweep that under the rug and say, ‘Oh, nothing to see here and everyone is a liar. And you’re a fool if you bring this up’. You’re inserting yourself into the story. A journalist would hear both sides and there are two sides to this story”, he recommended.

“I think there was a great deal of fraud and changing the election laws illegally, and I think a thorough investigation is warranted,” Senator Paul added.

Partisan Democrats in the media think they can get away with just calling Republicans liars because they don’t agree with us. Watch me stand up to one here: https://t.co/nwmEoAJ5zt

That’s why I’ll spend the next two years going to every state legislature trying to fix the laws, protect our vote and stop election fraud.

(Related: George Stephanopoulos: When Mail-In ‘Votes Are Thrown Out, That Shows That The System Is Working’)

Reporter Asks: ‘You’re Not Encouraging Americans To Inject Disinfectant?’, Trump Reacts: “No, Of Course, Not. …It Was Said Sarcastically”