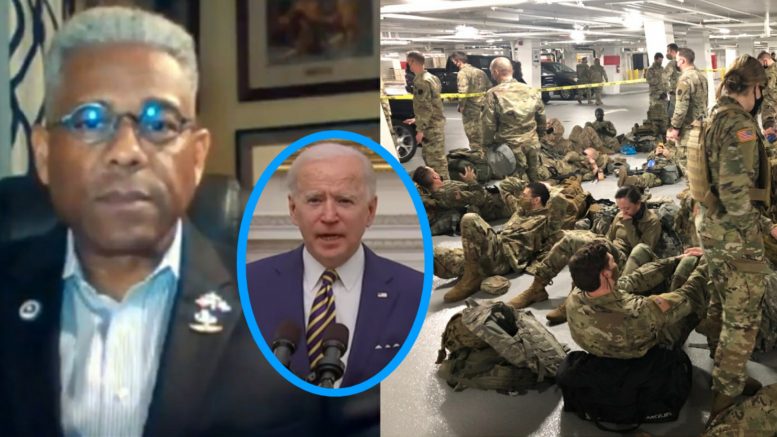 While interviewing with Newsmax’s Benny Johnson on Friday, Texas GOP Chairman Lt. Col. Allen West voiced his disgust with the way troops have been treated in the first days of the Biden Administration.

Outrage was sparked across the nation this week after reports revealed that thousands of U.S. National Guard soldiers — who have been standing guard and pulling security for two weeks leading up to President Joe Biden’s inauguration — were forced to vacate the Capitol and nearby congressional buildings on Thursday, and to set up mobile command centers outside or in nearby hotels. They were then told to take rest breaks during their 12-hour shifts outside and in parking garages, where many of the troops had to sleep.

Images and video evidence surfaced to back up the reports.

“Yesterday dozens of senators and congressmen walked down our lines taking photos, shaking our hands and thanking us for our service. Within 24 hours, they had no further use for us and banished us to the corner of a parking garage …” one Guardsman said https://t.co/2QneUNtBDe pic.twitter.com/Q8lZzP7hHV

“It’s appalling — it’s disgusting. I’ve been in command of troops and you always make sure that your troops are taken care of.

“But the real hypocrisy of this…think about if this had been President Trump’s inauguration, what would be the number one story that everyone would be talking about right now? It would be this — the fact that President Trump abandoned his troops to sleep in a garage on Capitol Hill. But even more so, think about the hypocrisy of calling all of these tens of thousands of troops to Washington, D.C., but where was the National Guard in Portland or Seattle just recently? And we saw Jen Psaki not say a thing about that domestic terrorism. This is Joe Biden’s America. This is how Joe Biden is going to treat our military.

“…There are many of us that are veterans or those that are still in the military upset about abandoning our troops in Benghazi and lying about it, and forcing our troops to surrender at the hands of the Iranian Revolutionary Guard Navy when they should have been fighting from those Riverine Assault Craft. Video Below