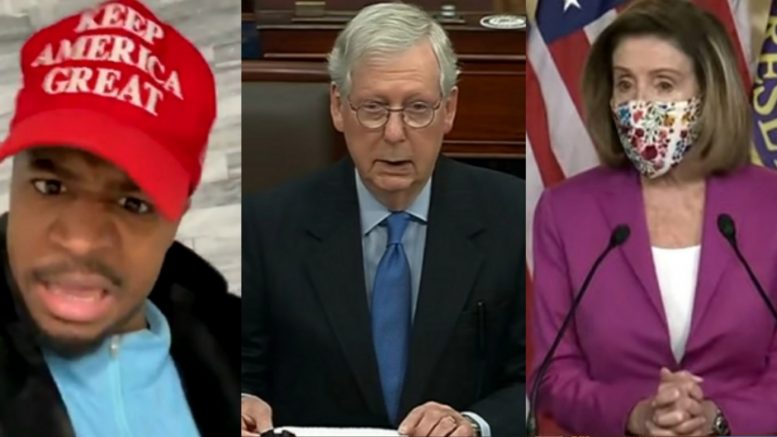 Trump advocate and comedian Terrence Williams is fired up after learning that Senate Majority Leader Mitch McConnell is reportedly “furious” with President Trump and supports Democrats’ move to impeach the 45th President just days before the end of his term.

*** UPDATE*** Sen. McConnell has since rejected reports that he supports Democrats’ impeachment effort. To read more on that CLICK HERE.

Four Democrat Congressmen introduced one article of impeachment against President Trump this week, alleging that he violated his oath of office in connection with the Capitol building temporarily halted last Wednesday’s joint session of Congress to validate the 2020 election results.

“One source told Fox News that McConnell has not made up his mind about what to do about impeachment, and does not see this as a partisan exercise like the previous impeachment effort against Trump.”

*** UPDATE*** Sen. McConnell has since rejected reports that he supports Democrats’ impeachment effort. To read more on that CLICK HERE.

“Really, Mitch? So, that’s how you rolling. So, you okay with them trying to impeach President Trump. Oh, so you agree with it. You fake! You phony, Mitch!” Terrence exclaimed. “You a backstabbing, fake, phony, no good, son of a…You know what, you gonna make me say something that’s gonna get me banned again. Mitch, you fake.”

“After everything that Trump has done for you. After everything, you gonna turn your back on him? You gonna stab him right in the back?” he questioned. “That’s how you’re gonna roll, Mitch after everthything he’s done for you? This man helped you get re-elected.” Full Video Commentary Below

YOU ARE SO FAKE MITCH MCCONNELL

So you are okay with them impeaching President Trump after all he has done for you?? He helped you get Re-Elected

WE STOOD BY YOU when they called you Cocaine Mitch.

* Raise your hand ✋if you are done supporting @senatemajldr pic.twitter.com/ZyI1AaO52j