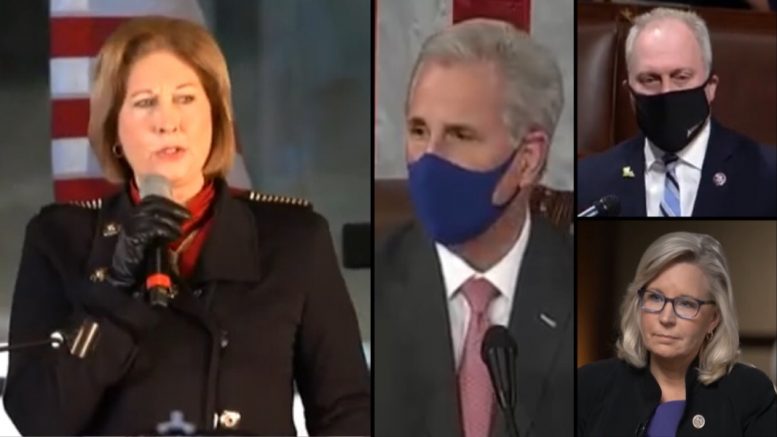 Powell’s notice comes one day before the Senate and House will jointly meet to open and count certificates of electoral votes from the 50 states and the District of Columbia in the wake of the 2020 Presidential Election.

“Kevin McCarthy and other House Republican Leadership — Have you made it abundantly clear to your caucus that their careers are effectively OVER if they do not vote for [President Donald Trump] on and after January 6?

If the election falls to the House, ALL Republicans must vote in the affirmative for [President Donald Trump]. Failure to affirmatively vote yes for Trump will mean forfeiting eligibility for any and all leadership and committee spots, and ZERO fundraising assistance from the RNC, NRCC, and all other Republican fundraising vehicles.

[Rep. Kevin McCarthy] Does your caucus know that this applies to ALL House Republicans, even those from states with predominantly Democrat delegations, and single-member delegations? Continued Below

The bare minimum action acceptable is affirmative yes votes for [President Donald Trump]. Voting present, abstaining, or not attending the vote is unacceptable and will be considered an effective resignation!!

@HouseGOP Vote like your job depends on it, because it does. Our Republic is at stake. #WeThePeople won’t tolerate weak political leadership.”

Powell also said in an additional tweet, “We are going to start much sooner than their next campaign. We are starting tomorrow”. Continued Below

(1/3) Kevin McCarthy and other House Republican Leadership — Have you made it abundantly clear to your caucus @HouseGOP that their careers are effectively OVER if they do not vote for @realDonaldTrump on and after January 6? @GOPLeader @SteveScalise @RepLizCheney @USRepGaryPalmer

Sidney Powell explained details of alleged fraud during an interview on “Global Prayer For US Election Integrity” this week and also weighed in on Wednesday’s Electoral count:

(Related: Sidney Powell: “The President Has All Of The Authority He Needs” Under 2018 Executive Order)