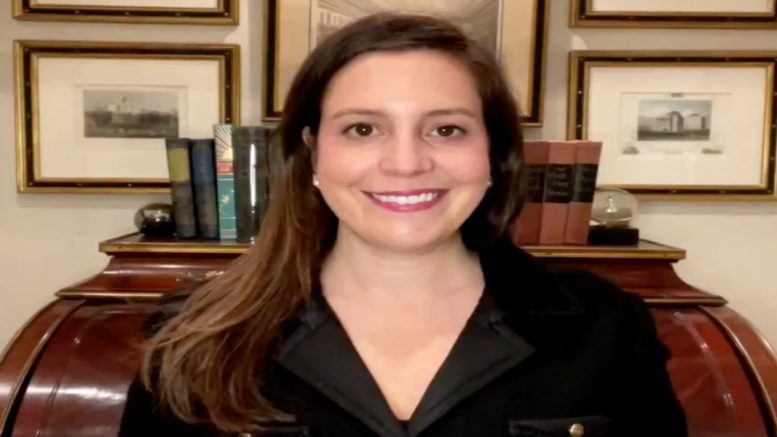 “I believe it is my solemn and sacred duty to serve as your voice and your vote in Washington [D.C.]. I swore an oath to protect and defend our Constitution, the utmost duty I preform as a member of the United States Congress,” said Rep. Stefanik in her video message.

“As the Representative for New York’s 21st Congressional District, I plan to object to certain contested electors on January 6th,” Rep. Elise Stefanik proclaimed. “I do not take this action lightly. I am acting to protect our Democratic process.”

The New York Congresswoman explained that “Article II and the Twelfth Amendment of the Constitution make clear that I have an obligation to act on this matter if I believe there are serious questions with respect to Presidential Election”, adding, “I believe those questions exist”.

“Tens of millions of Americans are rightly concerned that the 2020 election featured unprecedented voting irregularities, unconstitutional overreach by unelected state officials, and judges ignoring state election laws, and a fundamental lack of ballot integrity and ballot security,” she stated.

“To the tens of thousands constituents and patriots across the country who have reached out to me in the past few weeks, please know that I hear you. The most precious foundation and covenant of our Republic is the right to vote, and consequently, the faith in the sanctity of our Nation’s free and fair elections. As a member of Congress, I am committed to restoring the faith of the American people in our elections, that they are free, fair, secure, and according to the United States Constitution. Thank you and God bless the United States of America,” Rep. Stefanik added. Video Below

On New Years Day, the Commander in Chief explained in a series of tweets: “It must be noted that the State Legislatures were not in any way responsible for the massive changes made to the voting process, rules and regulations, many made hastily before the election, and therefore the whole State Election is not legal or Constitutional.”

“Additionally, the Georgia Consent Decree is Unconstitutional & the State 2020 Presidential Election is therefore both illegal and invalid, and that would include the two current Senatorial Elections. In Wisconsin, Voters not asking for applications invalidates the Election. All of this without even discussing the millions of fraudulent votes that were cast or altered!” he added.

(Related: Levin: “Any Republican Who Doesn’t Stand Up To This On 1/6…You Are Shredding The Constitution Along With Democrats”)