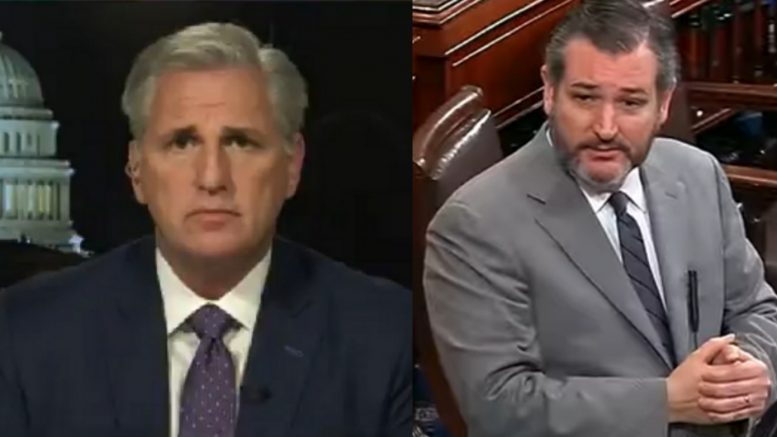 House Minority Leader Kevin McCarthy is standing firm behind the group of Republican senators, led by Senator Ted Cruz (R-TX), who officially announced that they will object to the January 6th certification of the presidential election results on Wednesday unless there is an emergency 10-day audit of the results by an electoral commission.

While appearing on Saturday’s airing of Justice With Judge Jeanine, Rep. McCarthy said that an emergency audit is “one way to unite the nation,” especially in a time when millions of Americans suspect fraudulent acts may have tainted the presidential election results.

“If you want to unite this nation, you’ve got to start with having integrity in your election,” Rep. McCarthy told Judge Jeanine.

“I think it would be one way to unite the nation in trust and make sure if they have problems in these elections, that they are corrected and that we do not go further and continue the mistakes that have been made,” McCarthy said.

Related Article: Swalwell Puts His Irritation On Full Display As 11 GOP Senators Come Forward To Object The Results On 1/6

“There are a number of states that have come into question here. That’s why we need the integrity in the election. This is the place that we have debate, and it’s healthy,” McCarthy said before pointing out that Democrats have often contested electoral votes with Republican presidents.

Check out my one-on-one interview with @GOPLeader where he reacts to the GOP Electoral objection plan and how the House is set to elect a Speaker tomorrow. pic.twitter.com/8R2aXL5iG5