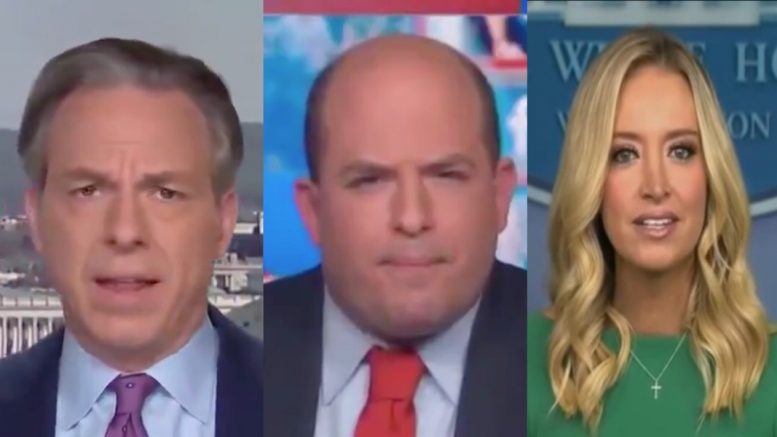 During a Sunday segment on CNN’S “Reliable Sources”, Jake Tapper vented his irritation on air to his colleague Brian Stelter, claiming that White House press secretary Kayleigh McEnany “tells lies all the time”, adding that he won’t book her for an interview.

McEnany, upon seeing the video clip of Tapper’s remarks, fired back and implied the CNN hosts’ segment is a “therapy session for a broken network”.

“There are some people that are so mendacious, I just wouldn’t put them on air,” Jake Tapper said of Trump administration officials.

“Kayleigh McEnany, I never booked her. … These are just people– they just tell lies the way that, you know, most people breath. There was no value in that,” Tapper told Stelter, appearing to admit he does not book interviews of Trump officials who will not peddle the network’s Democrat narrative.

Tapper then claimed that former White House counselor to the president, Kellyanne Conway, was a “filibuster and subject changer”, rather than “a liar”, adding, “I think it’s really different. I really do, and there is a risk in just like lumping everybody together. There’s a big difference in somebody like Kayleigh McEnany who just like– this is what she does: she tells lies all the time. She can’t acknowledge reality.”

“So, I’m just not not gonna put somebody like that on air,” Tapper added. Continued Below

White House press secretary Kayleigh McEnany fired back at Jake Tapper on Twitter, calling him “lazy” and also suggested the CNN segment is a “therapy session”.

“This is a therapy session for a broken network, and [Jake Tapper] is lazy enough to participate by lobbing baseless personal attacks, with ZERO evidence,” she wrote, appearing to acknowledge that Tapper did not provide any evidence to back up his claims.

“Jake’s real problem: I do not leak. I do not lie. But I DO call out the lies of the media (i.e. CNN Russia collusion hoax!)” McEnany added. Video Below