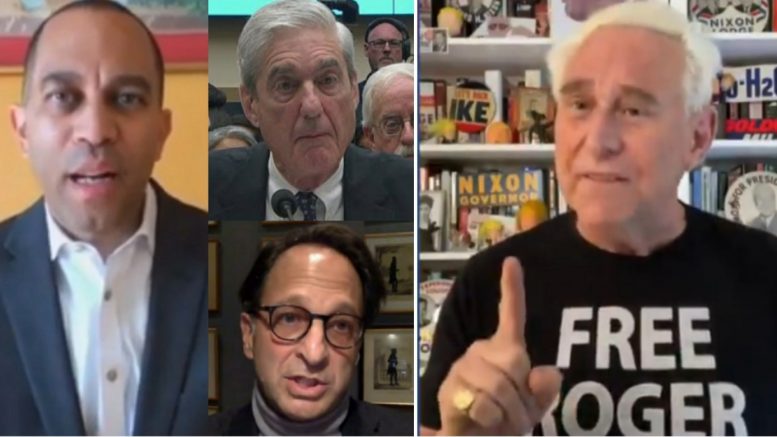 In his first Newsmax interview since being pardoned by President Donald Trump, Roger Stone vowed to sue Democrat leaders who have defamed him, as well as ‘the dirty cops’ who were involved in efforts to prosecute him.

Stone, who was one of 26 pardons and sentence commutations issued by President Trump on Wednesday, specifically called out Congressman Hakeem Jeffries, former Acting Attorney General Rod Rosenstein and former special counsel Robert Mueller and his “pit bull” Andrew Weissmann as being on his radar for lawsuits.

Stone referenced a July 10th tweet by Rep. Jeffries, when he said, “Roger Stone lied.
To cover-up for Trump. The corrupt President just paid him back. They can all be indicted.”

To cover-up for Trump.

The corrupt President just paid him back.

They can all be indicted.

Related Articles: Lewandowski On Roger Stone: “The Way He Was Treated By This Government Should Scare The Hell Out Of Every American”

“Congressman Hakeem Jeffries has said on Twitter…this accusation that Stone lied — Stone maintained his silence to coverup for the President. It’s a lie. There’s no evidence whatsoever to support that theory, and therefore, I’m going to bring a defamation suit against the Congressman,” Mr. Stone indicated. “He didn’t say this on the House floor. He said it on Twitter. He’s liable.”

“We can find out about their destruction of evidence, their withholding of exculpatory evidence from General Flynn and myself, their obstruction of justice — no, the dirty cops are going down,” Stone declared. “I’ve got it all. I can document it all. See you guys in court.” Video Below

Roger Stone tells @CarlHigbie "the 'deep state' was desperate to send me to a COVID-19 infested prison despite their rules and regulations against doing so." https://t.co/VlT7z8drtO pic.twitter.com/EoAHnZWEjd