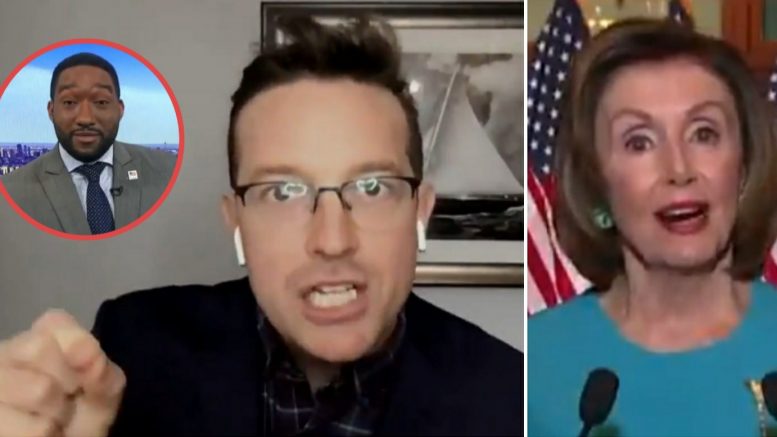 Benny Johnson of Newsmax lashed out at House Speaker Nancy Pelosi over the COVID relief package that took months to finalize, yet yielded only $600 to Americans and billions of dollars in foreign aid and pork spending.

President Trump has since blasted the final product that was passed by both the House and Senate, and threatened not to sign the bill unless the amount given to most Americans was increased to $2,000.

While the fate of the relief bill remains in limbo, Benny Johnson blamed House Democrats for failing to negotiate meaningful legislation for the millions of Americans who are suffering as a result of the pandemic. And he metaphorically suggested that a “dump truck full of coal should be dumped on Nancy Pelosi and congressional Democrats” as a result.

“Nancy Pelosi said specifically during a press conference two weeks ago that she held up this aid because Donald Trump was President and she didn’t want him to get the credit,” Benny said.

“And so no, I will have no blame being given to President Trump right now when you start peeling the onion layer back and start seeing exactly how much foreign aid and how much pork there is in this, we could have had a COVID relief bill done, signed, sealed, delivered this summer or this fall. And Nancy Pelosi tabled it — waited weeks and weeks and weeks, and then callously snuffed her nose, and said ‘Let them eat cake. I am Marie Antoinette. You won’t get a fridge full of ice cream like me. Go pound sand, kick rocks, American people. You get nothing for a crisis that we caused!'”

Related Article: Hoyer Gets Trolled By McCarthy With The Ultimate Photo-Bomb After Posing With Dems Who Lost Their Seats

“So, I will absolutely, absolutely not allow this panel to say that it is Donald Trump — zero percent!” Benny exclaimed. “Legislation is initiated in the House and begins there. That is where legislation starts. So that is our process and Nancy Pelosi has 100% culpability, not just because I say so, but because she said so.”

So, shame on Democrats for doing this to people –small business owners during the holidays! I will have absolutely none of it. If there is a pile of coal to be given, it should be a dump truck of coal dumped right on Nancy Pelosi and congressional Democrats’ heads. Shame on them!” he concluded. Video Below

.@bennyjohnson says a certain Speaker of the House should wake up on Christmas to lots of coal. https://t.co/VlT7z8v2lm pic.twitter.com/0NJoOMQGQD

Mark Levin Drops a Warning: We Better Start Winning a Slew of Elections or We’re Gonna Lose the Country