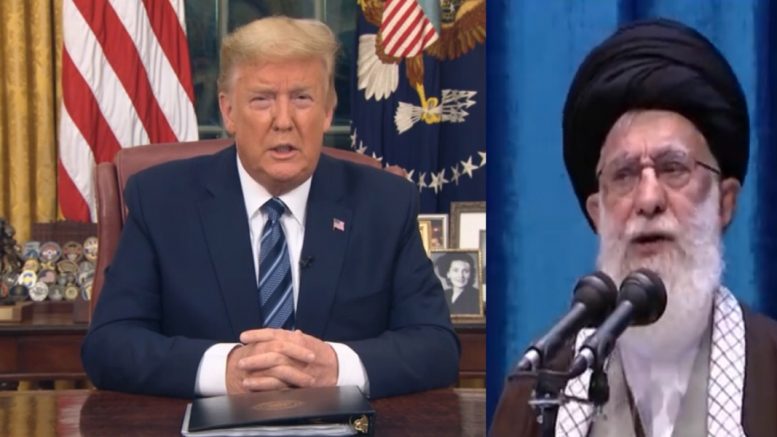 The Commander in Chief on Wednesday, put Iran in check after the U.S. Embassy in Baghdad was hit by “several rockets.”

Secretary of State Michael Pompeo on Sunday, strongly condemned the attack, writing on Twitter, “Iran-backed militias once again flagrantly and recklessly attacked in Baghdad, wounding Iraqi civilians. The people of Iraq deserve to have these attackers prosecuted. These violent and corrupt criminals must cease their destabilizing actions.”

“The U.S. Embassy confirms rockets targeting the International Zone resulted in the engagement of Embassy defensive systems. There was some minor damage on the Embassy compound but no injuries or casualties. We have received reports of damage to residential areas near the U.S. Embassy and possibly some injuries to innocent Iraqi civilians. As we have said many times these sorts of attacks on diplomatic facilities are a violation of international law and are a direct assault on the sovereignty of the Iraqi government. We call on all Iraqi political and governmental leaders to take steps to prevent such attacks and hold accountable those responsible”, the embassy said in a statement Sunday.

The Commander in Chief went public on Twitter Wednesday afternoon, warning Iran: “Our embassy in Baghdad got hit Sunday by several rockets. Three rockets failed to launch. Guess where they were from: IRAN,” he wrote.

“Now we hear chatter of additional attacks against Americans in Iraq. Some friendly health advice to Iran: If one American is killed, I will hold Iran responsible. Think it over,” President Trump warned.

Trump Reacts As Facebook Loses Daily Users For First Time In Its History: “People Are Waiting For TRUTH”

Dinesh D’Souza Indicates Why He Knows The Atlantic’s Story Is ‘Made Up’: “Why Did No One Say Anything Until Now?”