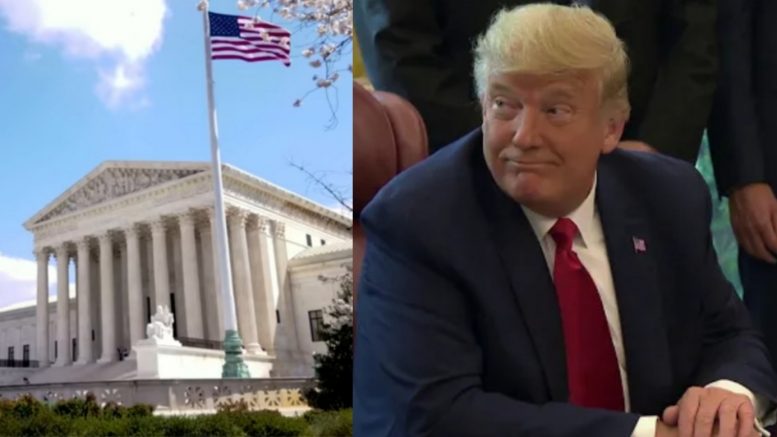 President Donald Trump’s campaign appears to have filed their first petition to the U.S. Supreme Court, according to a memo released on Sunday.

A petition for writ of certiorari filed by Trump’s legal team to the high court seeks to “reverse a trio of Pennsylvania Supreme Court cases” that the Trump campaign says “changed Pennsylvania’s mail balloting law before and after the 2020 presidential election.”

Related Article: Jenna Ellis: This Fight Is Not Over Yet, Not By A Longshot”

In a statement posted to the Trump campaign’s website, Rudy Giuliani wrote as follows:

“Donald J. Trump for President, Inc., President Trump’s campaign committee, today filed a petition for writ of certiorari to the US. Supreme Court to reverse a trio of Pennsylvania Supreme Court cases which illegally changed Pennsylvania’s mail balloting law immediately before and after the 2020 presidential election in violation of Article II of the United States Constitution and Bush v. Gore. This represents the Campaign’s first independent U.S. Supreme Court filing and seeks relief based on the same Constitutional arguments successfully raised in Bush v. Gore.

“This petition follows a related Pennsylvania case where Justice Alito and two other justices observed ‘the constitutionality of the [Pennsylvania] Supreme Court’s decision [extending the statutory deadline for receipt of mail ballots from 8 pm on election day to 5 pm three days later] … has national importance, and there is a strong likelihood that the State Supreme Court decision violates the Federal Constitution.’

“The Campaign’s petition seeks to reverse three decisions which eviscerated the Pennsylvania Legislature’s protections against mail ballot fraud, including (a) prohibiting election officials checking whether signatures on mail ballots are genuine during canvassing on Election Day, (b) eliminating the right of campaigns to challenge mail ballots during canvassing for forged signatures and other irregularities, (c) holding that the rights of campaigns to observe the canvassing of mail ballots only meant that they only were allowed to be ‘in the room’ – in this case, the Philadelphia Convention Center – the size of several football fields, and (d) eliminating the statutory requirements that voters properly sign, address, and date mail ballots.

“The petition seeks all appropriate remedies, including vacating the appointment of electors committed to Joseph Biden and allowing the Pennsylvania General Assembly to select their replacements. The Campaign also moved for expedited consideration, asking the Supreme Court to order responses by December 23 and a reply by December 24 to allow the U.S. Supreme Court to rule before Congress meets on January 6 to consider the votes of the electoral college.”

The bold move from the Trump Campaign comes in wake of a 36-page report released by Director of the Office of Trade and Manufacturing Policy Peter Navarro that details election-related fraud that is said to be “more than sufficient” to swing a victory to President Trump.

Here is a clip of Jesse Watters’ assessment of Navarro’s report: