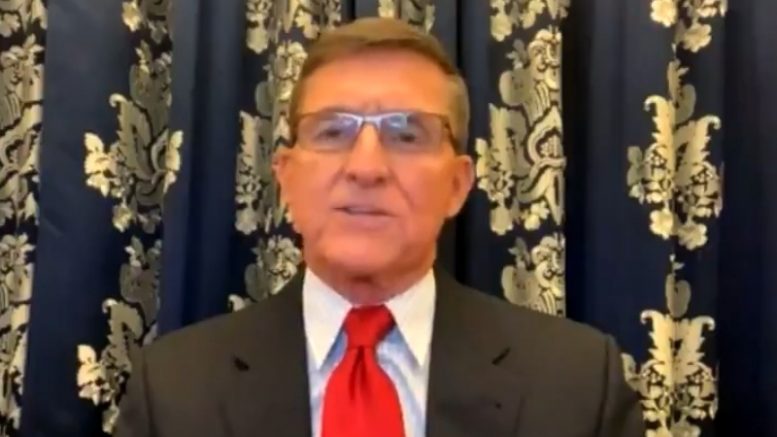 In wake of reports that there was foreign interference in the 2020 election, General Michael Flynn thinks the time has come for President Trump to order all Dominion voting machines to be seized across the country, and for a special counsel to be appointed to investigate the many irregularities that took place across several states.

General Flynn made the assessment while appearing for an interview with Greg Kelly of Newsmax on Thursday.

“What he needs to do now is he needs to appoint a special counsel immediately. He needs to seize all of these Dominion and other voting machines that we have across the country,” General Flynn told Greg Kelly. “He needs to go ahead and prioritize by state and probably by county — Fulton County, Maricopa County as an example — exactly what they did in Antrim County, Michigan, what they discovered. I think if he looks at a couple random sampling of some of these counties, he’s going to find some of the same problem.”

“These machines are clearly, clearly — there’s a foreign influence that is tied to this system,” he declared. “And it goes back to China. It likely goes to Russia. it likely goes to Iran. We know that Venezuela has participated in the development of these machines.”

“There’s been problems all over the country with them — not only Domimion, but also this Smartmatic software. So he’s got a couple of options that he can take. He needs to take them right now,” Flynn suggested. Video Below

In ending, here is Flynn expressing the need to “get this election fixed” so that Joe Biden can not become the next President.

.@GenFlynn is still able to laugh at @JoeBiden getting caught up in a lie. We got to get this election fixed! pic.twitter.com/s73TQ2NmSh

Kirstie Alley Issues A Defiant Statement In Response To Messing’s Blacklist Idea: ‘STOP ACTING Above The FRAY, Ya Damn Hypocrites’