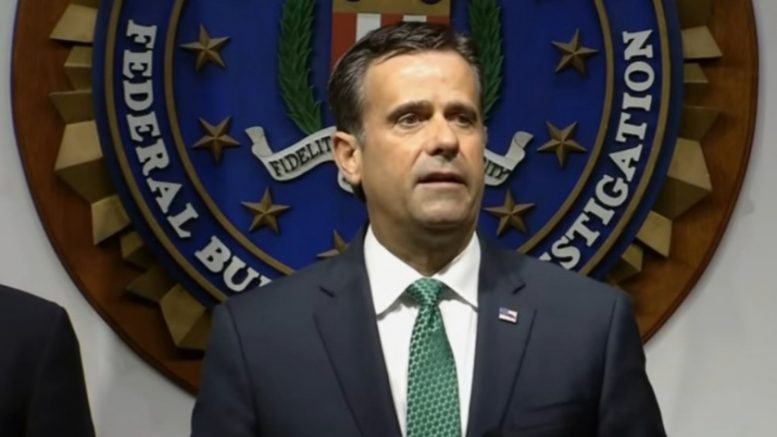 DNI Ratcliffe reportedly told CBS News that there was foreign influence in the 2020 election.

And he specifically called out China, Iran and Russia as being complicit, according to a report by White House correspondent Emma Robinson of Newsmax.

“There’s some breaking news out of the office of the Director of National Intelligence. CBS reporting that John Ratcliffe has told them that there was foreign influence from China, Iran and Russia in November in the 2020 election.

“However, that seems to contradict what the former director who was fired of CISA, Chris Krebs, said earlier about the election — statements he doubled down on yesterday during that hearing saying that it is ‘the most secure election in American history’.”

After rolling a clip of Krebs making the remarks during Wednesday’s hearing, Emma reported that the intelligence community “is learning more information regarding the 2020 election,” which explains why DNI Ratcliffe’s office will not meet the December 18 deadline as required by President Trump’s executive order citing, “a number of agencies have not finished coordinating on the product.” Video Below

Attorney Sidney Powell said earlier in the week that she expects Ratcliffe’s report will “blow the mind of every citizen in the country who’s willing to look at the truth and facts.”

YOU CAN READ MORE ON THAT BY CLICKING HERE

In ending, here is video from earlier on Thursday of CBS correspondent Catherine Herridge reporting on Ratcliffe’s claim of foreign interference:

1)
@DNI_Ratcliffe "told CBS News that there was foreign election interference by China, #Iran, and Russia in November of this year [2020]."

All Americans should be informed about how Iran & its lobby group @NIACouncil are meddling in the U.S.https://t.co/bxoWeys5FZ