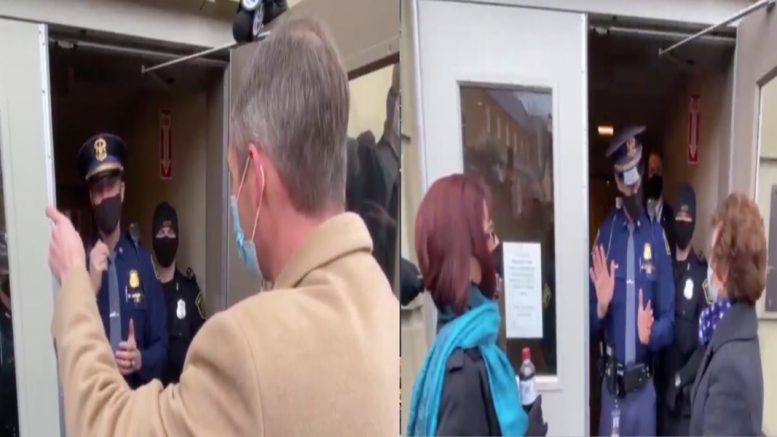 On Monday, a group of Republican electors for President Donald Trump arrived at the Capitol in Michigan to cast their electoral college vote for the Commander in Chief, however, Michigan State Police blocked access to the chamber, preventing the GOP electors from getting inside. (The electors may have been an alternate slate of electors.)

“The electors are already here, they’ve been checked in,” a Michigan State officer told the GOP electors at the door.

GOP electors for President Donald Trump arrive to the Capitol in Michigan:

Breaking: A group of GOP electors for Donald Trump arrives at the Capitol, heading towards the chamber to try to get inside to cast their Electoral College votes #ElectoralCollege #Michigan #2020Election pic.twitter.com/88kwEVZVOy

A Michigan State officer prohibits GOP electors from entering to go to the chamber:

“The Electors are already here, they’ve been checked in.” Michigan State Police are blocking access to the Capitol, preventing the GOP Electors from getting inside #Michigan #ElectoralCollege #ElectoralCollegeVote pic.twitter.com/GzTK5gGCJ1

The Michigan State officer told Ian Northon, an attorney with The Amistad Project, to redirect their inquiries to Governor Gretchen Whitmer’s office.

The officer said, “If you have a problem, you can contact the Governor’s office, Speaker of the House, or Senate majority leader”.

“If you have a problem, you can contact the Governor’s office.” State Police block access to the Capitol for the Trump electors, giving no reason for why the building is locked down & redirecting inquiries to Governor Whitmer’s office #Michigan #ElectoralCollege #Lansing pic.twitter.com/wqdPfpMC7H

Northon said of the GOP electors, “They’re being stopped from fulfilling their constitutional duty”.

“They’re being stopped from fulfilling their constitutional duty.” Ian Northon, an attorney with The Amistad Project, discusses the GOP electors presence at the Capitol today and being blocked from getting inside #Michigan #GaryEisen #ElectoralCollege #ElectoralCollegeVote pic.twitter.com/LUiAMde0qm

A Republican Representative from Michigan spoke out:

“Our Republican Electors felt that they needed to be seated today, too” Republican Representative from Michigan speaks out about sending a second slate of Electors while the vote is investigated #Michigan #ElectoralCollege #ElectoralCollegeVote pic.twitter.com/An56ZvLjCj

Meanwhile on Monday, a judge in Michigan on permitted parties in a court case to release the results of a forensic imaging examination of Dominion Voting Systems machines, with redactions of code.

Today, Trump electors, from the state of Michigan, were denied entry to the Michigan State Capitol after Governor Whitmer and other officials sent 200+ troops to guard the building.