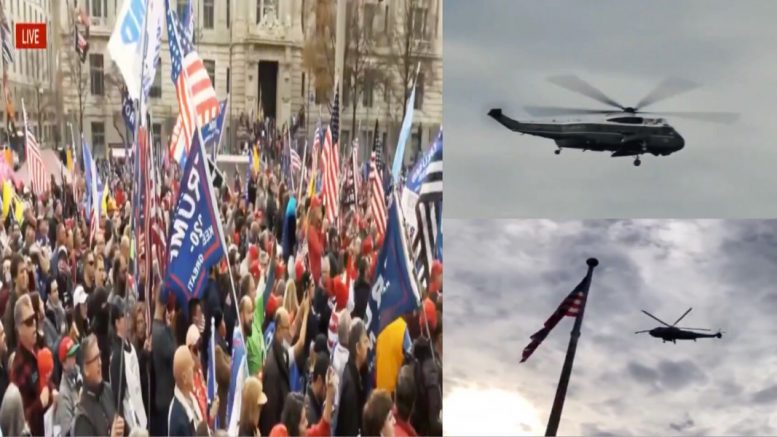 The Commander headed to Saturday’s Army-Navy football game at the U.S. Military Academy’s homefield in West Point, New York, which will mark the first time the storied rivalry will be held at an academy’s field since 1943. Saturday’s encounter will be the 121st game between the two service academies.

The game generally takes place at a neutral field. It had been scheduled to be played at Philadelphia’s Lincoln Financial Field, but limits on the size of the crowd due to the COVID-19 pandemic would have prevented all midshipmen and cadets from attending. Students from both schools will be at Michie Stadium, but no fans, Military Times reported.

The President on Saturday expressed admiration for the “March for Trump” rally, telling his supporters, “I’ll be seeing them!”

After departing the White House Saturday, Marine One flew over Freedom Plaza while thousands of Trump supporters were singing “The National Anthem” at Freedom Plaza for the “March for Trump” rally to support of the Commander in Chief.

AMAZING! Watch as @realDonaldTrump flies over the #MarchforTrump and #JerichoMarch in DC in Marine One! 🇺🇸 pic.twitter.com/pYnlXDSuG4

President @realDonaldTrump flies over Freedom Plaza in Marine One, before heading north to West Point for the #ArmyNavyGame.

Another view of the president flying over Freedom Plaza:

We leave you with some footage at Washington, D.C.’s “March for Trump”:

Just before noon at the Freedom Plaza in DC for the “March for Trump.” Crowd is chanting “USA!” and “Stop The Steal” ahead of things officially kicking off. Members of the far-right group Proud Boys can be seen throughout the crowd. Covering today on @MSNBC pic.twitter.com/9tStG3D4jK

#NOW: The second post-election March for Trump should be getting underway soon here in Washington. Hundreds of Proud Boys just arrived in Freedom Plaza, chanting F*ck Antifa and USA on a short march from outside the Hotel Harrington. pic.twitter.com/2gw3twhQvN

The Chinese American Alliance for Trump is out today, with a banner hundreds of feet across supporting the President #MarchForTrump #MarchFor45 #MAGA #DC #Trump pic.twitter.com/37vsmL4N8i

Amazing show of support for our president today! #MarchForTrump pic.twitter.com/tFvGqT675A