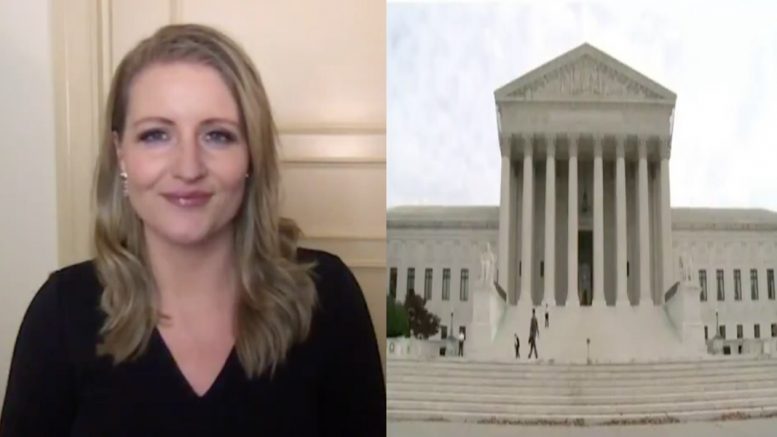 Senior legal adviser to the Trump campaign, Jenna Ellis, spoke to host Grant Stinchfield on Newsmax Friday in the wake of the U.S. Supreme Court rejecting a lawsuit brought by the state of Texas and backed by several states and Republican leaders, including the President himself.

Texas sought to sue Georgia, Pennsylvania, Wisconsin and Michigan over election-related irregularities and nullify the results on grounds that changes in voting laws were unconstitutional. The lawsuit asked that each of the state’s legislatures decide how to allocate their electors, as previously reported by The Freedom Times.

In response to the court’s decision, Jenna Ellis told Grant Stinchfield, “This is a moral failure across all three branches so far, of government.”

“First you have the executive you branch and that’s really the problem there. … They changed the rules and we know that. We have the clear evidence that shows that,” Ellis explained.

“And then the state legislatures, there are a significant number of them in these swing states states that want to do the right thing. They want to exercise their Article II authority, but it’s been a lot of the leadership that’s been just refusing to actually do the Constitutionally appropriate thing,” she said. Continued Below

“Then you have the Supreme Court that just really decided on a political whim to not hear this case when clearly, you have the interests of 80,000 American voters whose votes were disenfranchised, based on the corruption, based on ignoring the rules in these states. How they could pass on this, I think is shocking. I think it’s morally outrageous,” Ellis expressed.

“I’m glad to hear my co-counsel, Mayor Giuliani say, ‘The fight isn’t finished’. I think regardless of the outcome here, we are going to keep continuing to do the right thing. President Trump is courageous. He is standing for truth, the Constitution, and election integrity. That is all always a fight that is worth fighting,” she proclaimed.

Ellis said that she does not “know what is in the mind of these Justices”, adding, “I think that [Justices] Alito and Thomas were absolutely correct that when you have a case of original jurisdiction, you can’t decline to hear it. So the fact that they’re saying Texas and these other States, who have now joined, don’t have standing, I think is a ridiculous political posture, and is simply trying to say we are going to decline to hear this on the merits based on some procedural whim that they can try and push this off.” Continued Below

“I don’t’ think that was the appropriate Constitutional decision. And even if they had heard this on the merits and ultimately decided the outcome differently than what we would have preferred and what the U.S. Constitution stands for, I think that they should have given Texas and all these other states their day in court,” Ellis said.

She added that the “state legislatures still have time to do the right thing”, clarifying, “They can inquire, they can hold hearings, they can reclaim their delegates, and they should. I hope now all the evidence that we have brought forward in these hearings will give them the inspiration and the courage they need to act.”

“Saving our Republican and passing on liberty and justice and free and fair elections to the next generation depends on this generation making sure that they stand up and that we do the right thing and that we don’t allow corruption to rein. We are a nation of rules and the Constitution, not a nation of petty little election officials ruling the day at the ballot box,” Ellis said. Video Below

TEXAS LAWSUIT TOSSED: @JennaEllisEsq tells @Stinchfield1776, "this is a moral failure across all three branches of government."

It makes sense that a state would not have standing to challenge voting irregularities that only impacted state-wide elections. But when states join together in a process to elect the President and several states cheat, that violation of rules impacts the whole Electoral College.