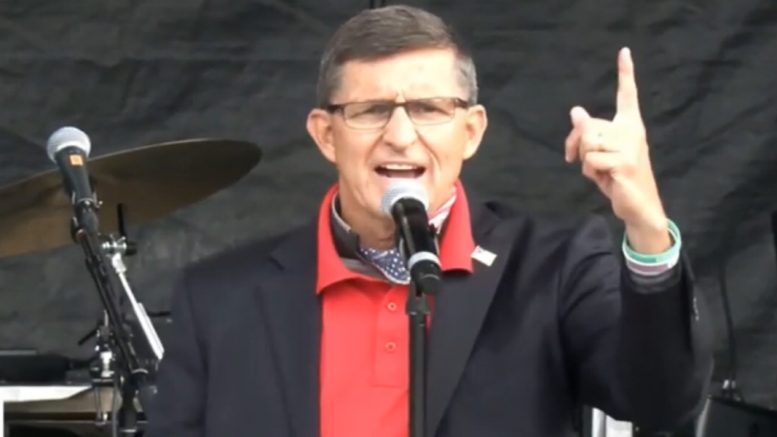 Thousands of supporters of President Donald Trump the “March for Trump” rally in Washington, DC on Saturday to support the Commander in Chief in the wake of the November election.

Another rally on the National Mall called the “Jericho March” was described on its website as a prayer rally with speakers praying for the “walls of corruption and election fraud to fall down”, where General Michael Flynn delivered remarks.

General Michael Flynn, former White House Security Advisor, was recently granted a pardon by the Commander in Chief on November 25, bringing to end a tumultuous four-year criminal case that felled the three-star general before prosecutors reversed course and declared they had improperly pursued his prosecution.

In his first public remarks, General Flynn urged the thousands of demonstrators gathered, to push for continued challenges to the 2020 election results.

“The courts do not decide who the next president of the United States will be,” the former national security adviser told the crowd. “There are paths still in play. Trust me. There’s a lot of activity that’s still playing out. … This is our Constitution and the fabric of our Constitution. … We the people decide.”

“This country is going through a historic constitutional crisis right now and we all know it, not just those people that voted for Trump, the entire country, the entire world is watching what we’re doing right now. And we have got to get this right. This actually is not about President Donald J. Trump. This is about the presidency of the United States of America. It is about the fabric of the Constitution of the United States of America. The Constitution is about individual liberties. When the founding fathers created it, they created it for that purpose,” Flynn explained.

“The founding fathers were really brilliant. They said, ‘We know that there’s gonna be corruption right here inside of the walls of Jericho’. They knew it. … So they created something where the states had responsibility, the people closest to we the people– the state’s legislatures. That’s super important,” he noted. Continued Below

“It’s a crucible moment in the history of the United States of America, it’s unprecedented. We’ve never been through this before. … This is new, this is new for all us. This is something that we are all facing,” General Flynn said.

“Why can’t these people get it? Why can’t these people around the states, around our country get it? We’re only asking to show us a little transparency. Why not recount? Why not look at signatures? Why not look inside these machines? he wondered. “Why? I mean, why not? What are they afraid of? What are they hiding from? They’re hiding from something.”

“We’re in a battle. We’re in spiritual battle for the heart and soul of this county. … We will win! We will win because that is the truth. … The truth will prevail. How do we fight? We fight with our faith and we fight with courage. Do not let fear get in the way of what I call breathing the fresh air of liberty. Nobody will take that from me,” the retired Army lieutenant general expressed. Video Below

(Related: WATCH: President Trump Flies Over The ‘March For Trump’ In D.C. Before Heading To The Army-Navy Football Game)