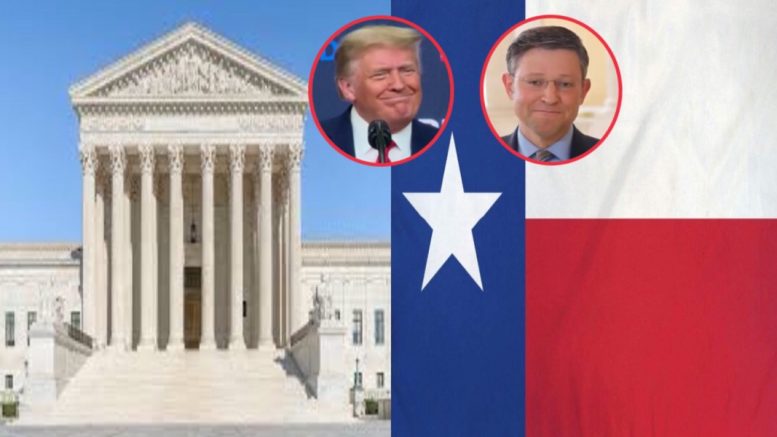 106 Republican representatives on Thursday, signed on to an amicus brief to the U.S. Supreme Court in support of the election suit filed by the State of Texas, which challenges the election procedures in Georgia, Michigan, Pennsylvania, and Wisconsin on the grounds that they appear to violate the Constitution.

Congressman Mike Johnson (R-LA) led the effort to file an amicus brief in the Texas case on behalf of House Republicans “who are all deeply concerned about the integrity of our election system”, he wrote on Twitter Wednesday.

The amicus brief expresses the signatories’ concerns with the integrity of our election system. The brief specifically calls attention to Article II, Section 1 of the Constitution that requires electors to be appointed in a manner directed only by the state legislatures. It asserts that the defendant states violated that key provision, and it is now the duty of the Supreme Court to carefully consider the facts and determine the appropriate course of action for the 2020 election, according to a press release from Rep. Johnson.

“As representatives of the people, we have a responsibility to ensure our elections are fair and that every legal vote is counted. The 2020 presidential election has raised important questions regarding the integrity of our election system,” the Louisiana congressman said.

“This amicus brief expresses this concern and our belief that the suit filed by Texas and supported by 17 states merits careful consideration and adjudication by the Supreme Court,” said Johnson. Continued Below

Rep. Johnson said President Trump called him Wednesday morning “to express his great appreciation for our effort” to file the brief.

“He said he will be anxiously awaiting the final list to review,” the Louisiana Republican said of the president.

Ken Paxton, the Texas attorney general, filed the lawsuit directly with the Supreme Court on Monday, alleging officials in Wisconsin, Pennsylvania, Georgia and Michigan unlawfully changed their voting laws, leading to election irregularities and skewing the results of the election. Continued Below

Eighteen states have joined Texas in its lawsuit against Michigan, Georgia, Wisconsin and Pennsylvania.

President Donald Trump on Wednesday filed a motion to intervene in the case, and reportedly asked Texas Sen. Ted Cruz (R) to argue the case before the high court.

Lawyer and chief counsel of the American Center for Law & Justice, Jay Sekulow, weighed in on the possible outcomes at the Supreme Court as states have joined the Texas lawsuit. Watch:

Doocy to Psaki on Illegal Immigrants Bussed From Texas to D.C.: ‘Are you Guys Gonna Help Them Find a Place to Stay & Something for Them to do?’