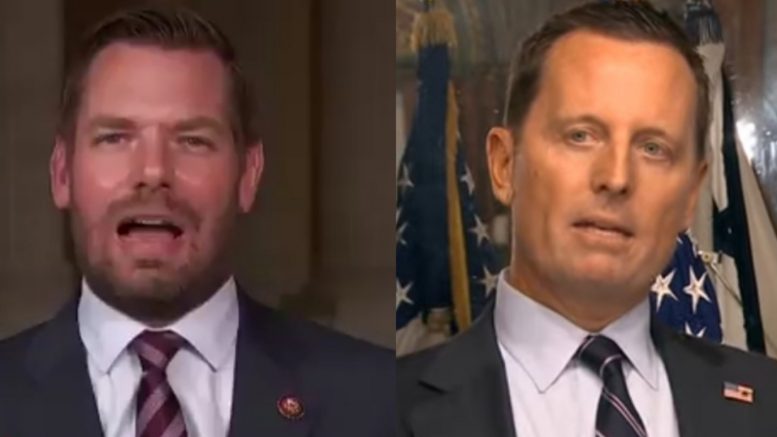 Congressman Eric Swalwell is now accusing President Donald Trump of being behind the bombshell report that exposed his close connection to an alleged Chinese Spy.

According to a report by Axios that was released on Monday, Swalwell, who is a member of the House Intelligence Committee, was targeted by a Chinese national named Fang Fang — aka Christina Fang — an alleged operative for China’s Ministry of State Security, which is the country’s intelligence organization.

Fang first interacted with Swalwell in the early stages of his political career when he served on the Dublin City Council in California, and right before being elected to the U.S. House of Representatives in 2012.

Fang went on to be involved with raising money for Swalwell’s reelection campaign, according to the report, and even helped place an intern in the congressman’s office.

Swalwell cut off contact with Fang in 2015 after U.S. intelligence officials provided a “defensive briefing” to him in regards to Fang’s activities that they had been monitoring, according to the report.

While Swalwell and his office refuse to comment on the extent of his relationship with the alleged Chinese spy, Axios reported that Fang had “romantic or sexual relationships” with at least two elected officials, who were mayors at the time of their encounters with Fang.

When pressed by Politico to comment on the report, Swalwell said he is convinced that President Trump is behind the timing of the report’s release, and he suspects it was done to hurt him politically in retaliation for his criticism and actions taken against the President.

“I’ve been a critic of the president. I’ve spoken out against him. I was on both committees that worked to impeach him. The timing feels like that should be looked at,” Swalwell told Politico.

He added: “What it appears though that this person — as the story reports — was unsuccessful in whatever they were trying to do. But if intelligence officials are trying to weaponize someone’s cooperation, they are essentially seeking to do what this person was not able to do, which is to try and discredit someone.”

In response, former DNI Richard Grenell hit Swalwell with a humiliating one-liner when he tweeted, “He who smelt it, dealt it.”

Grenell’s zinger killed two birds with one stone, as it likely referenced the time Swalwell appeared to pass gas on live TV, and is a classic metaphor for the stench that now arises from the Democrat congressman’s close ties to a suspected Chinese agent.

Related Article: Caught On Camera: Swalwell Appears To Break Wind On Live TV While On Hardball, Denies It Was Him

Grenell went on to call on the intel community to brief the Gang of Eight on Swalwell’s ties to the alleged spy.

. @ericswalwell downplayed the Chinese threat for years. He elevated and dramatized the Russia threat regularly.

This entire Swalwell report should immediately be briefed to the Gang of Eight and the Intel Committees should be briefed in a classified setting ASAP. https://t.co/kGIFxB0Wfa

Congressman Doug Collins called on Swalwell to step down from the House Intelligence Committee after learning of Axios’ report:

Eric Swalwell spent YEARS peddling Russian disinformation in an attempt to bring down this President.

Now we know he was being used by a spy to gain information for China.

He should step down from the House Intelligence Committee immediately.

Our national security is at stake!

In ending, here are a series of tweets where Donald Trump Jr. slams Swalwell over his close ties to Fang:

So Rep Swalwell who spent years saying I was an agent of Russia was literally sleeping with a Chinese spy at the time.

You can’t make this stuff up. How can this compromised individual/moron continue to sit on an intelligence committee? https://t.co/NkU6F5Ctre

Does anyone else notice that the Chinese Spies seem to always attach themselves to Democrats while simultaneously always attacking Republicans?

That should tell us all we need to know about who’s fighting for who. Democrats are the party of China! https://t.co/asxMD1UlFr

It's all starting to make sense!!! pic.twitter.com/BYTFVnyPee