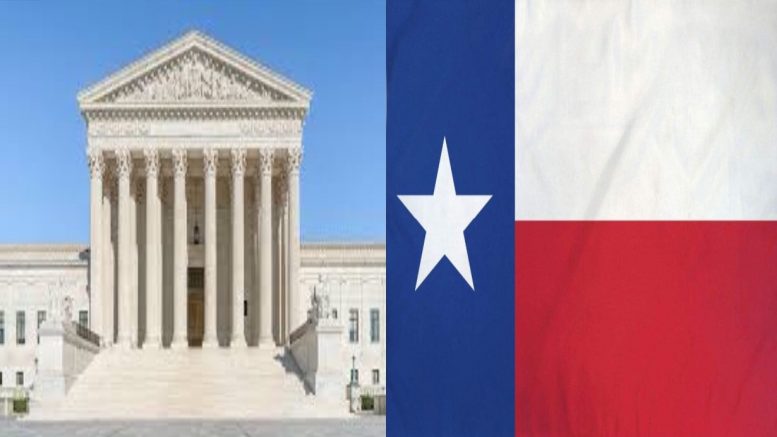 The State of Texas filed a lawsuit directly with the U.S. Supreme Court shortly before midnight on Monday challenging the election procedures in Georgia, Michigan, Pennsylvania, and Wisconsin on the grounds that they violate the Constitution, as previously by The Freedom Times.

The Supreme Court on Tuesday, immediately and officially listed the Texas case against the battleground states on the highest court in the land’s docket.

Pictured is a screenshot from the Supreme Court’s website, listing the Texas case:

Texas is asking the Supreme Court to order the states to allow their legislatures to appoint their electors. The lawsuit states in part:

Certain officials in the Defendant States presented the pandemic as the justification for ignoring state laws regarding absentee and mail-in voting. The Defendant States flooded their citizenry with tens of millions of ballot applications and ballots in derogation of statutory controls as to how they are lawfully received, evaluated, and counted. Whether well intentioned or not, these unconstitutional acts had the same uniform effect—they made the 2020 election less secure in the Defendant States. Those changes are inconsistent with relevant state laws and were made by non-legislative entities, without any consent by the state legislatures. The acts of these officials thus directly violated the Constitution. Continued Below

This case presents a question of law: Did the Defendant States violate the Electors Clause by taking non-legislative actions to change the election rules that would govern the appointment of presidential electors? These non-legislative changes to the Defendant States’ election laws facilitated the casting and counting of ballots in violation of state law, which, in turn, violated the Electors Clause of Article II, Section 1, Clause 2 of the U.S. Constitution. By these unlawful acts, the Defendant States have not only tainted the integrity of their own citizens’ vote, but their actions have also debased the votes of citizens in Plaintiff State and other States that remained loyal to the Constitution.

Meanwhile, the president took to Twitter on Tuesday, retweeting a picture of Justice Amy Coney Barret and wrote, “They got caught because we were leading by so much more than they ever thought possible. Late night ballot ‘dumps’ went crazy!”

The SCOTUS, however, on Tuesday, denied an “emergency injunctive relief” by Republicans to reverse Joe Biden’s alleged “victory” in Pennsylvania. The decision was announced in an order with no noted dissents. The court’s order read, “The application for injunctive relief presented to Justice Alito and by him referred to the Court is denied.”

#SCOTUS rejects GOP bid to stop Pennsylvania from certifying its election results. No. 20A98. pic.twitter.com/JfzL8xok5J

The Supreme Court only denied emergency injunctive relief. In the order, it did NOT deny cert.@MikeKellyPA’s suit is still pending before the U.S. Supreme Court.https://t.co/UNMZeuiDVy