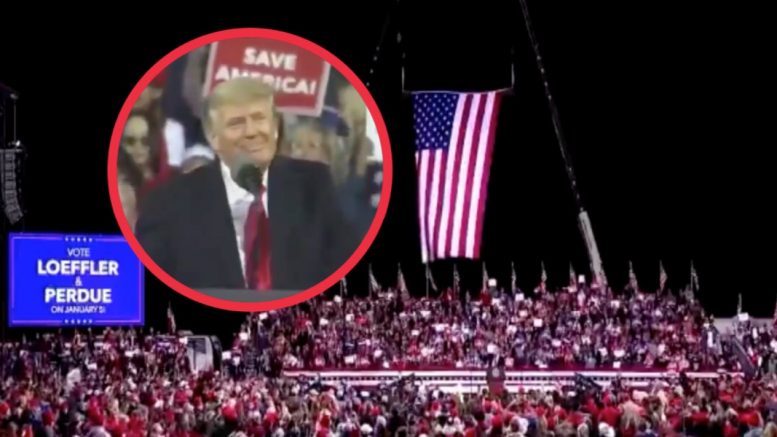 During a Saturday night packed rally in Valdosta, Georgia, our highly energetic Commander in Chief welcomed Republican Senators David Perdue and Kelly Loeffler to the stage to say a few words to a fired up MAGA crowd.

Senator Loeffler on stage, told the audience in part, “We are standing with President Trump because he’s fought for us every single day! Everyday!”

Senator Perdue up next to speak, told the rallygoers that he wanted to “say something personal to President Trump”, as the high engaged crowd began to chant.

Perdue was met with chants from the audience as he tried to get his message out. “Fight for Trump!” the crowd started to loudly roar.

Senator Perdue handed the microphone back to the President before Trump walked back to the podium, only to be met with a much louder roar of chants from the fired up crowd. “Fight for Trump! Fight for Trump!” the thousands of supporters shouted in unison. Video Below

The Moment Of The Night

By far the loudest chant of the night. pic.twitter.com/LACcIZA61Y

Here is another angle and the roar of the crowd:

Twitterverse responded to the chants demanding the GOP to “Fight for Trump!”

It’s in @KLoeffler and @Perduesenate’s own interest to “fight for Trump.” Anger over this stolen election is a powerful motivator for the GOP base in Georgia. Loeffler and Perdue would be fools to become targets of that anger, instead of channeling it to help them win the runoffs

The crowd is screaming "FIGHT FOR TRUMP" at Loeffler and Purdue, and by extension at the entire @GOP .

That's all they have to do.

And this is a GOP rally in Georgia without Trump. The GOP better take their heads out of their backsides and fight for his rightful victory. pic.twitter.com/JruXHNgbnn