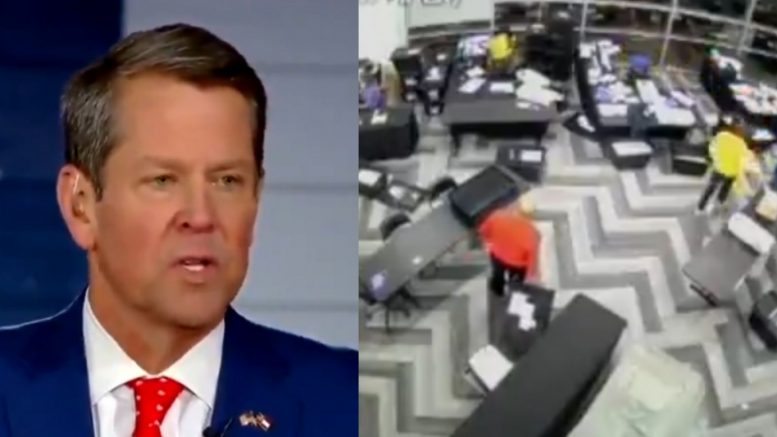 Governor Brian Kemp is now calling for a “signature audit” of the 2020 election results after newly released surveillance video shows Georgia poll workers suspiciously counting black suitcases full of ballots during a long period of time when observers were not present.

While appearing for an interview on the Ingraham Angle, Gov. Kemp said that he has been pushing for a signature audit, but it would ultimately have to be ordered by Secretary of State Brad Raffensberger.

“I called early on for a signature audit. Obviously, the Secretary of State per laws in the Constitution would have to order that. He has not done that. I think it should be done,” Gov. Kemp told Fox News host Laura Ingraham.

“I think, especially with what we saw today, it raises more questions. There needs to be transparency on that,” he added. “I would again call for that.”

“I think in the next twenty-four hours, hopefully, we’ll see a lot more,” Kemp suspected. “From the hearings that the legislature had today, we’ll be able to look and see what the next steps are.” Video Below

President Trump and his legal team have repeatedly called for a signature audit in Georgia, only to be ignored by state leaders.

Reacting to the latest revelations in Georgia, President Trump tweeted: “Wow! Blockbuster testimony taking place right now in Georgia. Ballot stuffing by Dems when Republicans were forced to leave the large counting room. Plenty more coming, but this alone leads to an easy win of the State!”

The President also, once again, called for Gov. Kemp and Secretary of State Raffensperger to order signature verification in light of the new discovery.

In ending, here is the bombshell video evidence that was presented during Thursday’s hearing: