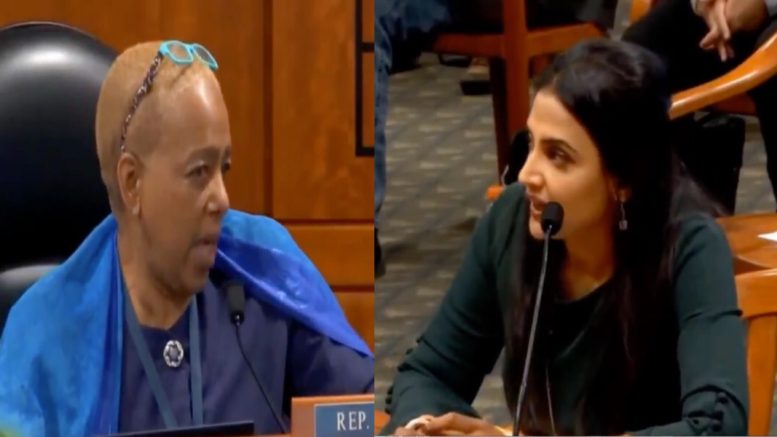 Wednesday during a Michigan House Oversight Committee hearing, Hima Kolanagireddy alleged witnessing fraud during the election as a representative observer of the Michigan GOP. She was brought as a witness to testify by President Donald Trump’s attorneys Rudy Giuliani and Jenna Ellis.

Rep. Cynthia A. Johnson (D), however, accused witnesses of lying during the hearing over what they witnessed during the November 3 election.

Rep. Johnson called a point of order, asking Chairman Matt Hall (R) to have the witnesses testify under oath.

The chairman slammed down his gavel and told Rep. Johnson she was “out of order”, noting, “As I’ve said, this is something that is not done here in this state.”

Johnson interjected, vented her frustration, and then alleged: “It may not be done under the state, but you’re allowing people to come in here and lie! And I know they’re lying.”

Chairman Hall once again slammed down his gavel, telling Rep. Johnson she was “out of order”, adding, “I’ve indulged you but you’re out of order, and we’re gonna move on.” Continued Below

Attorney Rudy Giuliani spoke up to say: “On behalf of my witnesses, I would like to point out that every single witness we’ve presented here has sworn an affidavit as to all of these facts”.

Hima Kolanagireddy politely asked the chairman if she may “say something” following her testimony, to which the he allowed.

“If that is what you want me to do, I will do it,” Kolanagireddy said, referring to testifying under oath. “And I will still repeat the exact same thing I was. And you know what? I also want to say one thing: If it is a lie, it may change, because a liar has to have a lot of memory power. If it is truth, you can ask me in the middle of the night, and it would still be the same.” Video Below

Rep. Cynthia A. Johnson accuses witness in Michigan State Senate Committee on Oversight of LYING about her testimony re: 2020 election fraud.

Her response is a mic drop moment.

"If it is truth, you can ask me in the middle of the night and it would still be the same." pic.twitter.com/lUiwMhN7G1

How do you know these witnesses are telling the truth about Democrat intimidation?

Because you’re witnessing Michigan LEGISLATORS openly intimidating them on the floor of this committee, on national television.

This is Michigan State Representative Cynthia A. Johnson when she assumed that Joe Biden won . pic.twitter.com/eXKB50yfeW

(Related: Voter Integrity Investigator Claims To Have Found Enough Illegal Votes To ‘Deny’ Biden A Win In The Electoral College)