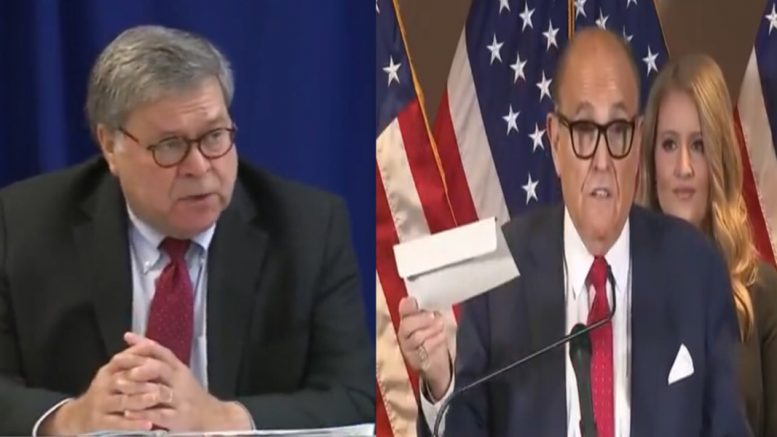 Attorney General William Barr reportedly said Tuesday the Justice Department has not uncovered evidence of widespread voter fraud that would change the outcome of the 2020 presidential election.

“To date, we have not seen fraud on a scale that could have effected a different outcome in the election,” AG Barr told the AP.

“There’s been one assertion that would be systemic fraud and that would be the claim that machines were programmed essentially to skew the election results. And the DHS and DOJ have looked into that, and so far, we haven’t seen anything to substantiate that,” Barr reportedly said, appearing to refer to Sidney Powell’s lawsuit.

Barr also reportedly said people were confusing the use of the federal criminal justice system with allegations that should be made in civil lawsuits. He said such a remedy for those complaints would be a top-down audit conducted by state or local officials, not the U.S. Justice Department.

“There’s a growing tendency to use the criminal justice system as sort of a default fix-all, and people don’t like something they want the Department of Justice to come in and ‘investigate,’” Barr said.

He said first of all there must be a basis to believe there is a crime to investigate. “Most claims of fraud are very particularized to a particular set of circumstances or actors or conduct. They are not systemic allegations and. And those have been run down; they are being run down,” Barr said. “Some have been broad and potentially cover a few thousand votes. They have been followed up on.” Continued Below

“With all due respect to the Attorney General, there hasn’t been any semblance of a Department of Justice investigation. We have gathered ample evidence of illegal voting in at least six states, which they have not examined. We have many witnesses swearing under oath they saw crimes being committed in connection with voter fraud. As far as we know, not a single one has been interviewed by the DOJ. The Justice Department also hasn’t audited any voting machines or used their subpoena powers to determine the truth,” the attorneys said.

“Nonetheless, we will continue our pursuit of the truth through the judicial system and state legislatures, and continue toward the Constitution’s mandate and ensuring that every legal vote is counted and every illegal vote is not. Again, with the greatest respect to the Attorney General, his opinion appears to be without any knowledge or investigation of the substantial irregularities and evidence of systemic fraud,” Giuliani and Ellis added.

what the Attorney General stated. The Department will continue to receive and vigorously pursue all specific and credible allegations of fraud as expeditiously as possible.” @ClareHymes22 @CBSNews