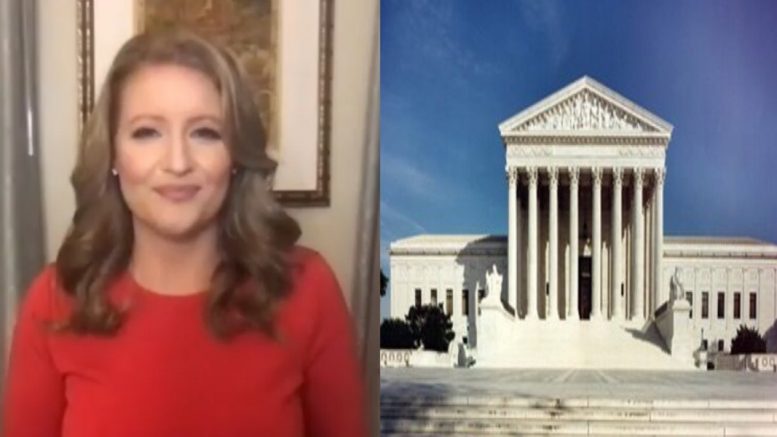 Ellis tweeted on Monday the news regarding the Third Circuit Court of Appeals in Pennsylvania, which granted the Trump campaign’s request for an expedited review of a lower court’s decision to dismiss a lawsuit over voting in Pennsylvania.

The appeal comes after U.S. District Court Judge Matthew Brann in Pennsylvania threw out the campaign’s lawsuit, which sought an injunction that would stop the certification of the election in Pennsylvania.

The Trump campaign argued that the Constitution’s guarantee of equal protection under the law was violated by the state when counties took different measures to inform voters of technical issues that arose with the unprecedented number of mail-in ballots.

Jenna Ellis told Greg Kelly Monday: “That means we are on our way to the Supreme Court and so, the Third Circuit, which is the Appellate Court, it’s the intermediate court between the middle district of Pennsylvania. That judge of course, gave that very legally inaccurate opinion. Then we appealed. The Third Circuit granted that appeal. They will decide if they want oral arguments, then of course, whoever loses at that stage, I’m sure we’ll be appealing up to the Supreme Court.”

“I want to be clear, we appealed initially just on the very narrow question of the judge denying our ability to amend our complaint. And even though he put in a bunch of other things that decided on the merits on things, he hasn’t even heard any evidence, he hasn’t reviewed anything. This is simply just to ask the Third Circuit to say, ‘Yes, he should’ve allowed us to amend our complaint’ and then we can move forward,” Ellis said. Continued Below

Meanwhile, President Trump’s attorneys Rudy Giuliani and Jenna Ellis released a statement on Sunday announcing that Sidney Powell is “practicing law on her own” and is “not a member of the Trump legal team.”

Clarifying why the Trump campaign put on the statement on Sunday, Ellis said, “Ultimately the legal team was looking at two different directions, and like lawyers do, we all discussed the best legal theory to serve the clients best interest. In this particular case, we want to make sure to preserve election integrity.”

“Sidney is very much focusing on Dominion Voting Systems, and that’s gonna be a much longer strategy and that’s gonna be something that she’s investigating. And right now, Rudy and I and the other members of the legal team are focused, is making these claims– looking at the election official fraud,” she explained. Video Below

Thank you, President @realDonaldTrump, for fighting for election integrity!!

This matters for today and for the future of our great nation! 🇺🇸

Hey @AriMelber and @JoyAnnReid, do you know how a case GETS to the Supreme Court?

One side has to appeal a final opinion they disagree with.

As I said, Third Circuit has granted our appeal, and we already have one case from PA pending before SCOTUS.

Thanks Ari for having me!

(Related: Sidney Powell Breaks Her Silence On Trump Legal Team’s Statement: “I Agree That I Am Not Part Of The Campaign’s Legal Team”)