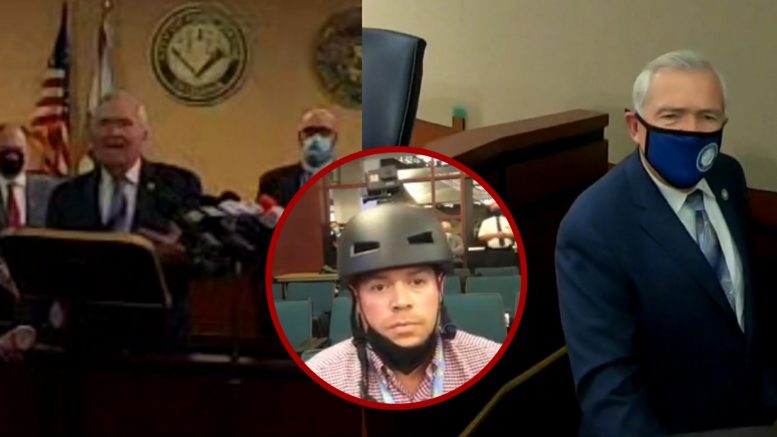 Fort Wayne, Indiana Mayor Tom Henry was put on the spot when a contributor for The Freedom Times caught him stating that “you will die” if “you don’t take appropriate action” against the coronavirus.

The situation unfolded during a press conference on Tuesday, where the Democrat mayor and the Allen County health commissioner announced restrictions and recommendations to deal with the sudden increase in COVID-19 cases in the vicinity of Fort Wayne, which is the second largest city in Indiana.

During his speech, Mayor Henry suggested that the rise of coronavirus cases was directly related to citizens going out to celebrate Halloween, and he warned the public against gathering together during the holidays that are approaching, which include Thanksgiving, Christmas and New Years Eve.

Henry then followed up by inaccurately quoting a doctor as saying, “If you don’t take appropriate action, you will die.”

“This virus continues to grow,” Henry said during the press conference. “I’m not sure that the vast majority of our citizens are listening. After every holiday event, there’s a surge. Right now, we have a significant surge and the last holiday was Halloween for God sakes! But we must have had a lot of people go out because there is currently a surge and a significant one.”

“We are going to be facing three more holidays in the near future — Thanksgiving next week, Christmas in a few weeks and New Years Eve shortly thereafter,” he continued. “Of all of the holidays in our country, those three… position themselves more than any other to a desiring of close contact.”

“We need to put the hammer down and we need to take the type of action necessary to convince our citizens that we’re serious about this,” he declared. “As the doctor said, ‘If you don’t take appropriate action, you will die.'” Video Below

The Freedom Times contributor, Joe Conner, who attended the briefing and recorded it on his GoPro-camera headset, was perplexed by the notion implied by Mayor Henry that “you will die” if you contract the virus by not following government guidelines.

When given the opportunity to ask questions, Conner pressed Allen County Health Commissioner Dr. Matthew Sutter on whether he agreed with Mayor Henry’s remark.

“Do you agree with Mayor Henry’s comment?” Conner asked.

Dr. Sutter said he did not agree that “you will die” if infected by the virus, and he cited scientific data that indicates an overall 0.05% mortality rate of those who contract COVID-19, which in turn, yields a 99.5% survival rate. Video Below

Dr. Matthew Sutter disagrees with the notion that "you will die" if you contract the coronavirus. He cites the 0.05% mortality rate. https://t.co/aBxlIWjy7C pic.twitter.com/uvqKOPgadO

At the end of the press conference, Mayor Henry walked back his initial comment and told Conner that he “misspoke” and really meant to say “you can die” instead of saying “you will die.”

Mayor Tom Henry said that he "misspoke" when he said "you will die" if you don't follow government guidelines to stop the spread of the coronavirus. pic.twitter.com/qPjOUMK1tB

In ending, here are videos of Dr. Sutter answering three more questions from our contributor: