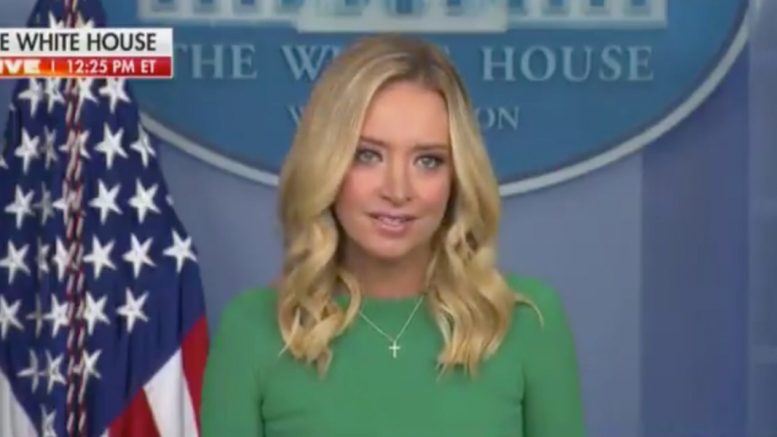 White House press secretary Kayleigh McEnany exposed the left’s hypocrisy over the call for unity, and she reminded reporters during a Friday press briefing about the “inexcusable” transition that President Donald Trump received after shocking the world when he defeated twice failed presidential candidate Hillary Clinton in the 2016 presidential election.

“This president was never given really a transition of power. His presidency was never accepted,” she told the press.

“In fact, we know before the election, Crossfire Hurricane was launched by Peter Strzok to pursue baseless allegations about president’s ties with Russia, that’s before he was president– trying to subvert the will of the American people. We know in August Peter Strzok wrote a text message about an insurance policy against a Trump presidency. Once again, trying to silence the voice of the American people,” McEnany told reporters.

A text message sent by former FBI agent Peter Strzok to Lisa Page, a former FBI lawyer with whom Strzok was having an affair with– in August 2016, mentioned an “insurance policy”, which was uncovered over the course of the Justice Department’s inspector general investigation into the DOJ and FBI’s conduct during the investigation into Hillary Clinton’s unauthorized private email server, which she used while serving as secretary of state.

The text Strzok sent to Lisa Page on Aug. 15, 2016, read: “I want to believe the path you threw out in [former FBI Deputy Director Andrew McCabe’s] office — that there’s no way he gets elected — but I’m afraid we can’t take the risk. It’s like an insurance policy in the unlikely event you die before you’re 40.”

“In 2016, in October, we know there was a FISA warrant. A FISA warrant taken out to spy on the Trump campaign,” McEnany said, which was documented in Inspector General Michael Horowitz’s 478 page report that was released in December 2019. Continued Below

“And the American people spoke commandingly in electing President Trump, despite all of the odds. What happened after he was elected?” the White House press secretary asked reporters.

“You had 70 lawmakers say we’re not coming to his inauguration– Democratic lawmakers. You had [Massachusetts Democratic Senator] Elizabeth Warren saying, ‘We’re gonna obstruct the Trump transition by urging the government accountability office to investigate the incoming Trump transition,” she continued, referencing a request made in November 2016 by Senator Warren and the late Representative Elijah E. Cummings (D-MD).

“In January of that year, you had [former] President Obama have a ‘by the book meeting’, where they talked about the Logan Act, using that Act to go after Lt. General Michael Flynn,” McEnany also pointed out, referring to notes from Peter Strzok, which were released in June, revealing that Joe Biden appeared to be the one to raise the “Logan Act v[iolation]? And Barack Hussein Obama ordered: “Make sure you look at things” with “the right people” during a January 2017 meeting. Continued Below

“Just before the inauguration, you had Buzzfeed promoting and publishing this bogus Steele dossier that’s been widely debunked,” McEnany also referenced.

Republicans on the Senate Judiciary Committee in July, released declassified documents that they say “significantly undercut” the “reliability” of the infamous Steele dossier from the Russia probe, as well as the accuracy and reliability of the factual assertions in the Foreign Intelligence Surveillance Act (FISA) warrants against former Trump campaign aide Carter Page, as reported by Swamp Drain.

“And then, for two years, you had the basis Mueller investigation. Which searched for collusion, found none, and exonerated President Trump,” McEnany also noted.

In October, Director of National Intelligence John Ratcliffe, declassified documents that revealed former CIA Director John Brennan briefed former President Obama on Hillary Clinton’s purported “plan” to tie then-candidate Donald Trump to Russia as “a means of distracting the public from her use of a private email server” ahead of the 2016 presidential election, per Swamp Drain. Continued Below

“While in 2016, President Trump became the dully elected president, many sought to undermine him, discredit him, delegitimize him, and deny his victory. There were no calls for unity. There were no calls for healing. While every legal vote is counted, let us not forget the inexcusable transition or lack thereof that President Trump had to endure in 2016 and four years into his presidency,” McEnany added, informing reporters of the left’s hypocrisy.

.@PressSec reminds the press corps about the "inexcusable" transition President Trump received in 2016:

“I don’t call on activists” 🔥 pic.twitter.com/jDHIM8tPuH

Dr. Carson On Sunday’s ‘National Day Of Prayer’: “There’s Nothing Wrong With Godly Principles, No Matter What Your Faith Is”