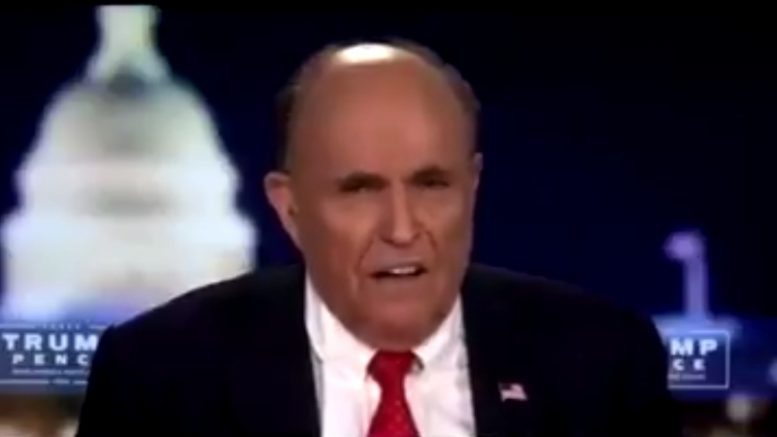 President Trump’s attorney Rudy Giuliani claims that a synchronized effort to manipulate the results of the presidential election took place in as many as ten states, specifically in Democratic-run cities.

Giuliani made the assertion while appearing on Thursday’s airing of Hannity.

Related Article: Candace Owens Indicates Why It’s Clear That ‘Democrats Have Something To Hide’ About The Election

“It was a national conspiracy. It wasn’t just three states, it was ten states,” Giuliani told Sean Hannity.

“It’s impossible that in Pittsburgh and in Philadelphia and in Detroit and in Milwaukee and in Phoenix, the Democratic leaders woke up on November 3rd and said, ‘We’re going to shut all of the Republicans out. We’re going to put them in chutes — we’re not going to let them see absentee ballots.’ When for a hundred years, we always look at absentee ballots.”

“This had to come from some place in the Biden campaign as an instruction to all of them,” Rudy speculated. “Because in ten jurisdictions — they picked crooked Democratic cities to do it in to get away with it — they stole probably about two million votes.” Video Below

.@RudyGiuliani says it was a national conspiracy. It wasn’t just three states it was 10 states. pic.twitter.com/NgsR4443pK

Giuliani went on to say that election officials in Democrat strongholds around the country made mistakes in efforts to “steal” the election when they “went into panic mode” as initial results showed President Trump ahead of Biden by hundreds of thousands of votes.

“Give us a chance, we’ll prove it,” Rudy declared.

.@RudyGiuliani says this was the big heist and we caught them and we can prove it. pic.twitter.com/BPwJrMO08r